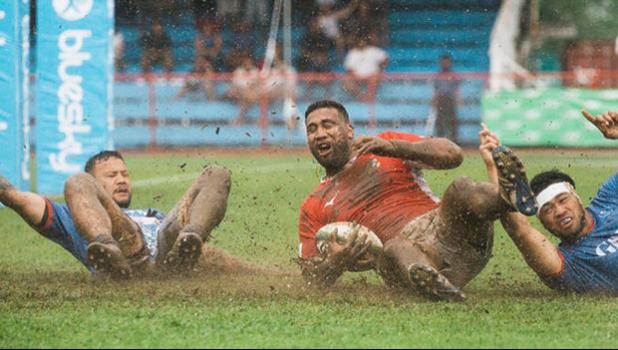 Apia, SAMOA — Samoa and Tonga turned down the chance to play last weekend's Pacific Nations Cup rugby test in another country despite World Rugby expressing concern about the state of the playing field at Apia Park.

Manu Samoa beat Tonga 25-17 on Saturday afternoon in wet and muddy ground conditions, which raised questions from players about the decision-making and player safety processes prior to the match.

Pacific Rugby Players' Association CEO Aayden Clarke said players from both teams were briefed about the weather conditions during a training camp in Auckland earlier this month, while officials from World Rugby raised the prospect of playing the game offshore, with no other grounds in Samoa meeting international standard.

"It was about a week out that World Rugby actually called and said they have got some concerns around the weather scheduled for it and obviously the wear and tear that the park may have, so we looked at contingency options then," he said.

"But it was really important that Samoa had the opportunity to engage with the community and that week was really, really successful - it was just a pity that especially on game-day the heavy rain continued to fall."

"There was a third option that it was played in a different country, but nobody wanted that to happen and I think I can speak for the Tongans as well because they understand the importance of engaging with the community.

"In the end the weather just really was not favourable leading into it, through the Pacific Games and from the information that I've received the Samoa Rugby Union, the ground staff, everybody went to every effort to try and get that park ready but in the end it just wasn't able to sustain it."

A pitch inspection was undertaken by the referee prior to the game, and both teams were briefed on the abandonment procedure, should the referee deem that the surface was unplayable during the game, but no concerns were raised by coaches Steve Jackson and Toutai Kefu at any point.

Aayden Clarke said some players did get in touch with Pacific Rugby Players after the match to express their frustration but after meeting World Rugby staff on Monday he was satisfied with the with the procedures and processes that led to the game going ahead.

"I received a few calls and messages from some of the guys who were playing in the game and that probably triggered straight away our processes in terms of engaging with World Rugby about it," he said.

"Our job in that situation was to be able to report back to the players the facts of which we've done in the last days around the ground."

"After comprehensive conversations around the detail on not just match-day but leading into it from a player safety perspective we're comfortable that all options were explored and the consultation that was necessary with the two coaches and the referee was acceptable from World Rugby.

"Although it obviously affected the type of game that was played from a player safety perspective we're comfortable now."

World Rugby's Pacific Nations Cup Tournament Director Michael Groom said: "Our number one priority is player welfare and our procedures are extensive in that regard.

"While the conditions were not optimal owing to extremely adverse weather and the playing of the Pacific Games competitions the week prior, the match official team deemed the surface playable prior to the match. The same inspection standards were applied as with any test match."

Aayden Clarke said the situation at Apia Park has highlighted the fact that Pacific Island nations might need more financial resources and support to ensure they are able to keep their sporting facilities.

"I guess that's what has been highlighted and what we've had in recent years in Tonga as well, with not having any test matches at home because of the standard of the ground," he said.

"Definitely we're comfortable that the processes that World Rugby went through are no different than what would happen in a tier one test," he said.

"The big difference here is the difference between tier one and tier two infrastructure and facilities.

"The SRU have already made comments around trying to make improvements at Apia Park in the future and the game on the weekend really highlighted probably what was needed."

"I think what's positive is it will start conversations between different governments around exactly how we improve the infrastructure of the stadiums.

"The players are as aware as anybody of the huge role that rugby plays within the communities and the huge benefit for not just business but morale in the communities to have their stars and their idols playing test matches in their home countries."