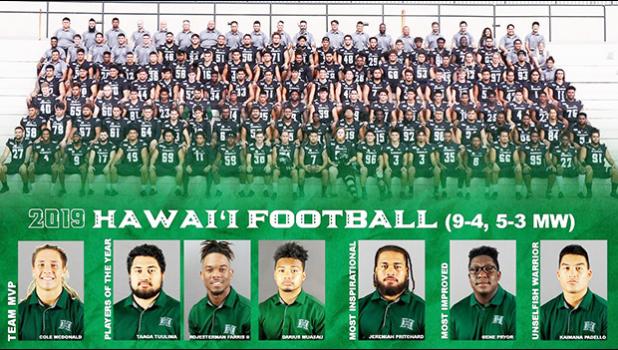 HONOLULU – The University of Hawai'i football team, staff and supporters celebrated the 2019 season with the annual Alec Waterhouse Football Awards Banquet, Sunday, at the Pōmaika‘i Ballroom at Dole Cannery.

The Rainbow Warriors (9-4) wrapped up the regular season with a 52-31 victory over Army West Point on Saturday. UH will compete for the Mountain West Championship this week against Boise State in Boise, Idaho.

The Alec Waterhouse Most Valuable Player award went to quarterback Cole McDonald, a junior from La Mirada, Calif. Last year’s offensive MVP has passed for 3,401 yards and 29 touchdowns with a 64.8 completion percentage this season. He reached 3,000-yards for the second straight season joining Timmy Chang and Colt Brennan as the only UH quarterbacks with two or more seasons of 3,000-yards.

The Ben Yee Most Inspirational Player Award went to linebacker Jeremiah Pritchard, a junior from Leone, American Samoa. After redshirting last season, Pritchard has started 10 games with 40 total tackles, including 3.5 for loss and one sack.     The recipient of the Coach June Jones Offensive MVP award was lineman Taaga Tuulima. The junior from ‘Ewa Beach, O‘ahu, started every game at center and played all but 20 offensive plays all year, allowing only two sacks. He was instrumental in helping the Warriors rank among the nation’s leaders in fewest tackles-for-loss per game and sacks allowed per attempt.

The Coach Bob Wagner Defensive MVP was defensive back Rojesterman Farris II, a four-year letterman from Coral Springs, Fla. The senior put an explanation point on Saturday’s win over Army by setting a new school record with a 100-yard interception return for touchdown. Farris has 48 tackles on the year and 10 pass breakups.     The Coach Dick Tomey Special Teams MVP was freshman linebacker Darius Muasau of ‘Ewa Beach, O‘ahu. UH’s nominee for Mountain West Freshman of the Year, Muasau played on all of the coverage units. In addition, he started four games at linebacker and is the team’s third-leading tackler with 53 tackles, including two for loss and two fumble recoveries.

The Jenny Matsuda Scholar Athlete recipient was running back Hekili Keliiliki, a sophomore from Bentonville, Ark.