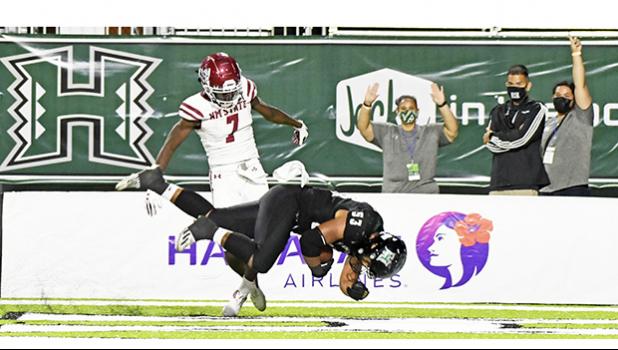 Calvin Turner Jr. had six carries for 94 yards and a touchdown and added five receptions for 30 yards for Hawaii (4-4) and freshman Brayden Schager, making his third consecutive start in place of injured Chevan Cordeiro (shoulder), completed 25 of 29 passes for 219 yards.

Juwan Price scored for New Mexico State (1-7) on 46-yard run to tie it at 27-all but on the next play from scrimmage Turner took a handoff, cut left to the sideline and raced untouched for the score to give Hawaii the lead for good with 1:18 left in the third quarter. About four minutes later, Darius Muasau returned an interception 75 yards for a touchdown to make it 41-27.

Parson scored on runs on 9 yards and 1 yard and Khoury Bethley had a 79-yard pick-6 to help the Rainbow Warriors take a 24-3 lead midway through the second quarter.

Juwan Price had a 56-yard TD run and Ethan Albertson kicked a 44-yard field to trim New Mexico State’s deficit to 24-10 at halftime.

It was Hawaii’s first regular season home game played in front of spectators — with a limited capacity of 1,00 fans — in nearly two years due to COVID restrictions.

Hawaii paid tribute throughout the game to former quarterback Colt Brennan, who passed away in May at the age of 37. The 2006 Heisman Trophy finalist set multiple program and NCAA passing records.

Hawaii Defensive Lineman, Justus Tavai, exhibits athletic pass rushing excellence playing both Nose Tackle and an occasional Defensive End in special defensive schemes. UH Head Coach Todd Graham told the Samoa News post game that Justus is a remarkable athlete in that he is a huge traditional interior Nose Tackle, but has the skills to play outside with speed and agility.

Legendary late University of Hawaii QB, Colt Brennan, had his #15 retired at half time of the Hawaii vs New Mexico State Football Game.
Parents, Terry and Betsy Brennan, were smiling through tears as the University presented, by surprise, their late son’s jersey in a a framed presentation at Clarence T.C. Ching Complex, Manoa, Honolulu, Hawaii.

The many Samoans who played with Colt Brennan (the Purcell brothers, Jason Rivers, Nate Ilaoa, etc) embraced his interest in Samoan language and culture.  Many of the offensive calls by Colt and his Offensive Linemen were in the Samoan language.