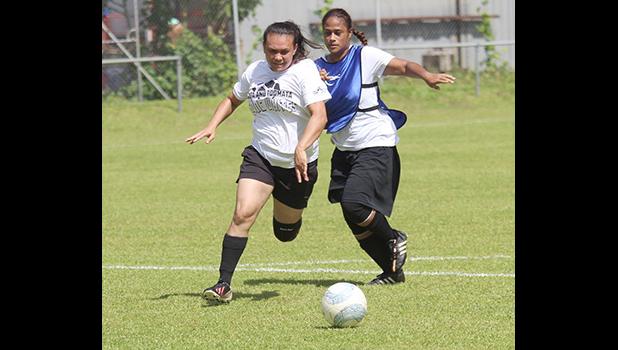 A new champion for the women’s division will be determined by the semifinal winners in the final scheduled for Wednesday, Dec. 5, 2018 at 4 p.m. Taputimu and Utulei will play in the game for third place on Dec. 5.

Last year’s champion, Royal Puma, did not make the top 4 this year in a bid for a repeat.

Two direct kicks by Faafeu Amisone and Olivia Vaiomounga in the second half helped Pago Youth upset the No. 1 seed Taputimu after a close score in the first period, 2-1.

Amisone had a towering shot from outside the penalty area that found the top corner of the far post in the 28th minute, and Vaiomounga’s shot in the 41st was of a similar nature too.

Angie Pola of Pago Youth pounced on two goalie mistakes to turn the tide against Taputimu Youth in the first half. Taputimu came out strong, dominating possession and territory in the first seven minutes of the game. The first few forays by Pago Youth into Taputimu territory turned out fruitful as Pola pounced on the ball when her opponent’s goalkeeper missed a clearance kick inside her own box on the 7th minute.

Pola scored her second goal in the 18th minute on another similar mistake by the goalie, giving Pago Youth a 2-0 lead.

Salevu Filiva’a cut it down in half with a goal for Taputimu, beating a diving goalie with a low shot that found the far post in the 19th minute, but that was all they could manage against a very strong Pago Youth team.

This was the second time these teams have met with Pago Youth winning the first meeting 3-2.

Lela West-Hunkin used her speed to beat Utulei’s defenders to a through ball and score the game-winner for Ilaoa & To’omata last Saturday.

West-Hunkin, a member of the 2011 women’s national team that competed in New Caledonia, was a threat with her speed during the game but could never get a good through pass because of great defending by Utulei. That finally happened in the last 10 minutes of the game as she was unmarked at midfield, giving her excellent position for the through pass that resulted in the goal that put Ilaoa & To’omata into the final on Wednesday.

It was West Hunkin’s second goal of the game, with the first coming in the first 10 minutes of the opening half.  Meki Taumoepeau of Utulei equalized midway through the first half.