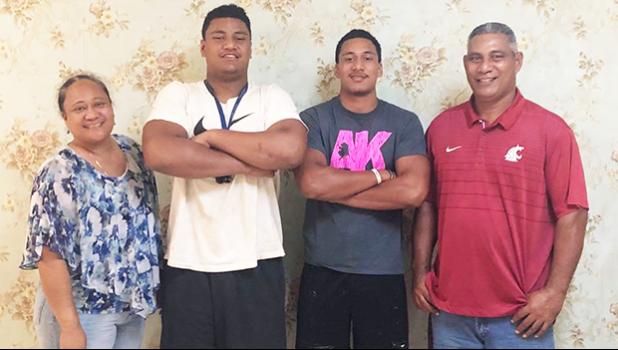 He currently attends North Park University in Chicago where he is a dual-sport athlete. Frank plays football and volleyball. He led the volleyball team in hitting percentage and was nominated player of the week twice.

Frantacia, the oldest girl of the siblings played volleyball and graduated from THS. Her senior year, she played under Head Coach Lydia Faleafine and was named MVP her senior year.

She will be a senior this year attending Chaminade University-Hawaii.

Frederick, played AYFS, and at THS football under Head Coach Okland Salave’a. ‘Fred’ is the first student-athlete out of American Samoa to be selected to participate at the Nike Opening in Eugene Oregon. He was also selected to play in the Blue-Grey All American game held at the Dallas Cowboys Stadium. Out of high school, Fred held offers from Oregon State, Washington State, BYU, Hawaii, Nevada, and UNLV.

He committed and signed with Washington State University, and played as a true freshman in his first year of college. Going into his sophomore year, he started every game at center, until graduating this year with his bachelor's degree.

After the NFL draft, Fred sign with the Carolina Panthers, he's currently in training camp preparing for the upcoming NFL season.

Francisco played quarterback at THS under Head Coach Kevin Magalei in his freshman and sophomore years.  He transferred to Saint Thomas Aquinas in California for his Junior year of high school.

Standing at 6'6- 280lbs in his first year of high school football, Francis has accomplished something that has never been done before by any student-athlete from American Samoa. He started at the varsity football level playing offensive and defensive line. He dominated the opposition on both sides of the ball; and, as of today, Francis is ranked the #1 DL prospect in the country for his recruiting class. He is also ranked #7 prospect in the country for the 2023 class.

With three more years of playing high school football Francis recruiting will continue to pick up. A few of the programs that have offered Francisco and Francis have strong ties to American Samoa. Coach Joe Salave'a from the University of Oregon (Leone), Coach Shaun Nua University of Michigan (Manu'a), and Coach Keiki Misipeka Missouri Southern State University (Fagatogo).

Fidelis is the youngest of the boys, and currently lives in Hawaii. He's in 8th grade and a dual-sport athlete playing football and basketball.  It will only be a matter of time before Fidelis hits high school where his recruiting will begin.

Fedelma is the youngest baby girl of the family — and time will tell what her contribution to the family’s legacy will be.

The Fa'a Samoa is instilled in the siblings and have strong Christian values. They are the proud sons of Telesia Iulio Mauigoa of Aua and  Faalialia Mauigoa from Fusi-Safata in Samoa.

The family foremost thanks God for the talent and the many blessings that are shown in so many ways and through so many people.

They believe early exposure to youth football has set the foundation to discover and then continue to explore and expand their passion in the sport —thanks to AYFS and JPS. Their thanks also goes out to the many family of coaches and counselors (local and abroad) who’ve sacrificed their time and effort to coach and counsel each of the boys and daughter.

“We further want to thank Rachel Jennings and those who’ve kindly hosted the kids without cost, and Teka and Mark Shelton, Siloo and Moli Peapea, Akenese and Petelo Petelo, Momma C., Momma Kristina and Jim, Brian and Suzette.

“Prayer warriors at the VOC- Vaitogi under the leadership of Rev. Fusifou and Vaosa Mauigoa, thank you for the many prayers,” the family concluded.