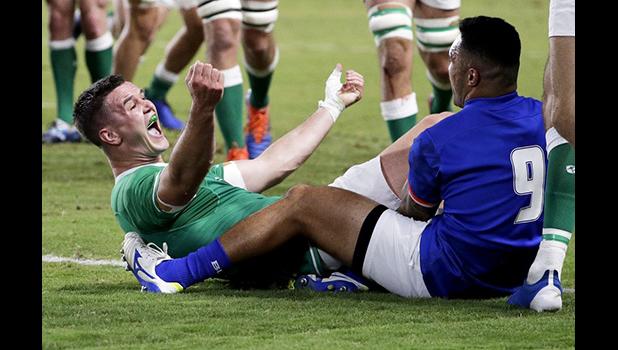 TOKYO (AP) — Ireland crushed Samoa 47-5 in their final Pool A game to reach the quarterfinals with a bonus-point victory.

Ireland scored four of its seven tries with a player less, after center Bundee Aki became the first Irish player sent off at a World Cup.

He got marched in the 29th minute with the scored 21-5, but if anything Ireland played better afterward.

Flyhalf Johnny Sexton notched 18 points — including two tries — as Ireland easily made sure of reaching the last eight on a chilly night, and moved to the top of Pool A ahead of host Japan’s game against Scotland on Sunday.

Because of a super typhoon hitting Japan, World Rugby will assess whether that match goes ahead. If not, Japan joins Ireland in the quarters.

Aki, who is of Samoan descent, got red-carded for a dangerous high tackle on Ulupano Seuteni, leading with his shoulder in the flyhalf’s face.

By then, Ireland had already scored three tries — one each from hooker Rory Best, prop Tadhg Furlong and Sexton.

Back-rower Jack Lam — Samoa’s captain — pulled one back a few minutes before Aki got his red.

Despite being a man down, Ireland scored 26 unanswered points.

The Canadian and Namibian teams have been advised their last game of the Rugby World Cup could be canceled because of the strong typhoon that made landfall in Japan on Saturday night.

Canada and Namibia were scheduled to get the last day of pool games started just after midday local time on Sunday at Kamaishi Recovery Memorial Stadium on the northeast coast of Japan’s main island.

The local government has warned all residents and visitors to seek safe shelter and World Rugby issued a statement urging any ticketholders not already in Kamaishi to delay any travel until the match status is confirmed.

World Cup organizers plan to assess conditions on Sunday morning at Kamaishi and at Yokohama, where Japan and Scotland are to meet in the last game of the pool stage.

Against the backdrop of a nation being pummeled by a super typhoon, a Rugby World Cup match between Ireland and Samoa kicked off in Fukuoka.

Typhoon Hagibis, closing in from the Pacific, forced the cancellation of two group games on Saturday — one involving tournament favorite New Zealand against Italy, the other between old rivals England and France.

But this one went ahead as planned, with only light wind swirling around Hakatanomori Stadium for the 7:45 p.m. kick off.

In fact, for some of Ireland’s players and their green-shirted fans attending in large numbers, it must have felt just like playing back home in the autumn, except a bit warmer.

The win moves Ireland to the top of Pool A ahead of Sunday’s match between host Japan and Scotland in Yokohama.

World Rugby will assess the stadiums for the four games on Sunday, and can leave a decision until six hours before kickoff.

If that game is called off, Japan and Ireland will advance to the quarterfinals.

Tokyo and surrounding areas are braced for a powerful typhoon forecast as the worst in six decades, with streets and trains stations unusually quiet as rain poured over the city.In some areas, store shelves were bare after people stocked up on water and food.

Typhoon Hagibis, closing in from the Pacific, is expected to bring up to 80 centimeters (30 inches) of rain in the Tokyo area, including Chiba to the north that had suffered power outages from a typhoon that hit last month, and some buildings remained partly repaired.

The Japan Rugby World Cup squad got out for a quick practice session on a drenched field in downtown Tokyo as people in the area preparing for the potentially devastating weather conditions.

Some residents taped up their apartment windows in case they shattered.

A typhoon that hit the Tokyo region in 1958 left more than 1,200 people dead and a half-million houses flooded.