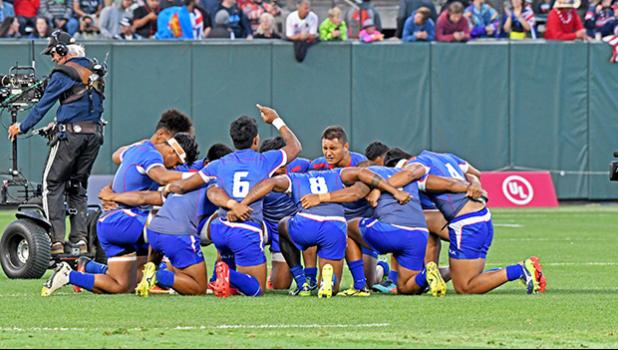 San Francisco, CA — They tried but they fell short, four points at that.

And with that, Manu Samoa’s hopes of winning the Sevens Rugby World Cup in San Francisco, U.S.A., have been dashed.

Losing to England, 15-19, it was an emotionally fuelled clash where one of the strongest Samoan men, who had been their go-to-man, Belgium Tuatagaloa, was reduced to tears on the sideline where he could not contain himself.

Arguably one of Samoa’s best players, Tuatagaloa was sin binned over a questionable high tackle in the first half.

What the referee termed a deliberate knock on in the second half, followed by another infringement when he saved a try, earned him a red card. He spent the last four minutes of the game with his head buried in his hands.

The men in blue though can hold their heads high. They might have lost the game – not helped by a number of dubious calls by the referee – but they played well.

They managed to get on the scoreboard in the first minute when Neria Foma’i broke some tackles to score their first try. Foma’i was on the receiving end of a pass from a strong Alamanda Motuga run. Alatasi Tupou missed the conversion, 5-0.

England hit back through a Phil Burgess try from a quick line out throw. Their second came moments later when Tuatagaloa was in the bin for the first time.

But the replay showed that Mike Ellery’s foot had landed on the touchline which means the try should not have been awarded. It was anyway and England headed to the halftime break, 5-12.