Frederick Mauigoa continues to make noise in the Pacific Northwest 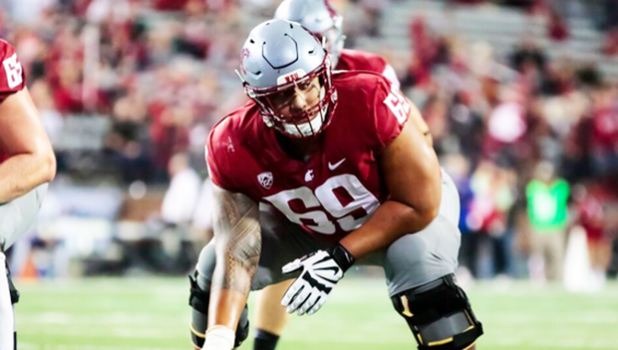 Pullman, WASHINGTON — A 6-3, 310-pound football star from Ili’ili continues to make noise in the Pacific Northwest, and he shows no signs of slowing down.

Frederick Mauigoa, a senior at Washington State University, was named to the Rimington Trophy watch list on Friday. It is the second-straight season the Cougar star has made the preseason watch list for the award, which is presented every year to the nation’s top center.

Mauigoa, a graduate of Tafuna High School, is among 80 centers on the watch list for the award, which was first presented in 2000 and has never been won by a Washington State player.

In addition to the Remington Trophy, Mauigoa was also named to the Wuerffel Trophy watch list.

The son of Faalialia and Telesia Mauigoa has had an excellent collegiate football career. He was named All-Pac-12 Conference honorable mention last season, and he has never redshirted for WSU, appearing in 30 games for the Cougs, including starting the last 26 games in a row at center.

Last season, according to wsucougars.com, Mauigoa was the third-highest graded Pac-12 center, and the fourth-highest graded interior lineman in pass blocking in the Pac-12 by Pro Football Focus.

Mauigoa is one of four starters returning on the 2019 Washington State offensive line, a unit that allowed just 13 sacks last season.

When he was a THS Warrior, playing under head coach Oakland Salave’a - brother of former WSU assistant head coach/defensive line Joe Salave’a - Mauigoa became the first student athlete from American Samoa to be selected to play in the Blue-Grey All-American Bowl in Dallas, Texas back in 2015 when he was a senior at Tafuna.

ESPN.com, at the time, rated him at the #1 overall prospect from American Samoa and #62 offensive guard prospect in the country.