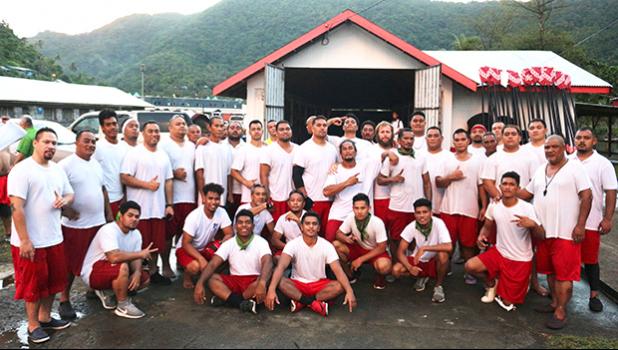 Pago Pago, AMERICAN SAMOA — The 50-man crew who will be powering the Fealofani Samoa III from Fagasa during the 2019 Flag Day fautasi race this Saturday, led by skipper Atuatasi Aga Seigafo who said there are 40 seats on the boat. The extra 10 people are 'reserves'.

The Fealofani Samoa III crew has been preparing for the big race since the end of February. They started off with conditioning and now they are in good enough shape to go out and row.

When asked about any changes, Atuatasi told Samoa News, “A lot of our rowers have gone off island so our crew this year consists mostly of youth members and high schoolers — We also have a lot of new rowers who are just beginners and are rowing for the first time."

Atuatasi said Fagasa’s goal this year to is “Come out on top, and we are looking to take first place.” He continued, “We are also focusing on disciplining the village youth, making sure they avoid drugs and alcohol, and trying to go back to the old ways… of being disciplined and getting our village aumaga in order.”

He concluded, “Our utmost THANK YOU to our village of Fagasa for their strong and never-ending support for our auva’a, especially our Fagasa supporters from off-island. We’d also like to wish the best to the government of American Samoa and may we have a peaceful and happy Flag Day this year.”

Atuatasi’s advice to the Flag Day Fautasi Committee: “Please be fair and square, do the right thing, conduct things the right way in order for us to have a fair, safe, and happy Flag Day fautasi race.”