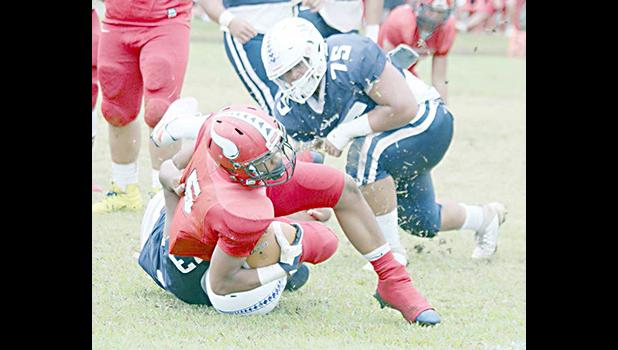 Pago Pago, AMERICAN SAMOA — Come out and support your school tomorrow morning at the Veterans Memorial Stadium, as the reigning ASHSAA Football Champions, Samoana Sharks will look to try another shot for the championship title game, as they will battle the underdogs Faga’itua Vikings in their play off match up.

Their first match up this season was during the season opener that concluded in favor of the Blue Empire – Tomorrow, the Vikings will look to turn their season around for a shot at the title game.

Meanwhile – The No.1 seed and the only undefeated team in the league, Tafuna Warriors will take on the Marist Cru- saders who slipped through to the playoffs after a shocking win against the Leone Lions last Saturday morning.

The two teams who will come out victorious in tomorrows playoff match will face off next weekend to determine the champion of this years football season.

Today at 4pm, the Tafuna Warriors and the Marist Crusaders will vie for this years ASHSAA Football Junior Varsity Championship title in a match up that is guaranteed to put you on the edge of your seat.

Good luck to all teams in this years playoff.