With Samoa allowing flights into the country for citizens stranded in N.Z and easing stay at home rules, I think America Samoa should ...
Do the same
36%
Only ease stay at home rules
12%
Keep things the way they are
52%
Total votes: 130
Home

Thanks to pilot — no injuries 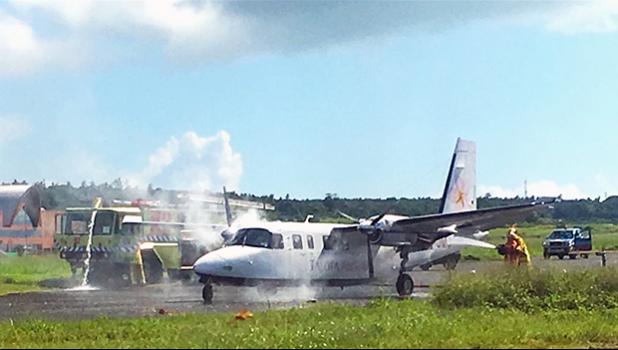 Apia, SAMOA  — This photo provided by an American Samoa resident, who was a passenger on board a Talofa Airways flight, shows firefighters at the Faleolo International Airport in Samoa on Tuesday (Samoa time — Monday, American Samoa time) surrounding the aircraft, hosing it down. Smoke seems to have originated from the engine on the left side of the plane.

The passenger told Samoa News yesterday that the flight took off for Pago Pago but turned back to Faleolo airport, because of smoke coming out of one of the plane’s engines or props. According to the passenger, when the plane landed firefighters quickly surrounded the aircraft, spraying it down with water.

The passenger credits the calm pilot in ensuring the safety of the passengers, landing the  aircraft safely. No one was injured.

With its plane down Talofa Airways passengers are being accommodated, since yesterday morning, by Samoa Airways, according to a Talofa Airways employee, who answered the phone yesterday at the airline’s local office at the airport. The employee said this will continue until later this week.