Miss Pacific Islands serving the community, one immunization at a time 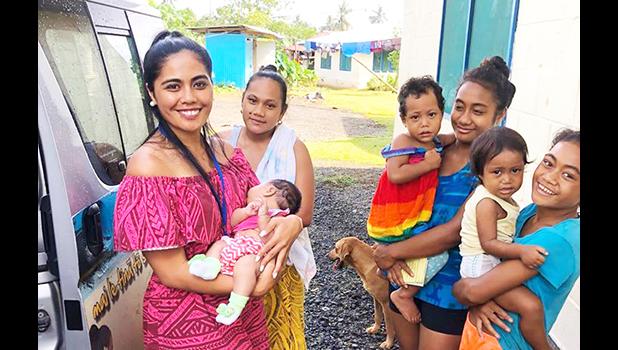 A nurse by profession, Fonoifafo had requested to the Samoa Tourism Authority (STA) and Samoa’s Ministry of Health if she could work in her capacity as a nurse while in the independent state - and her wish was granted.
Miss Pac
“While my primary role is to be an ambassador for our country and the whole of the Pacific under the Tourism authorities, the other half of my reign will see me working under the Ministry of Health - particularly in the fields of immunization and public health,” wrote Fonoifafo in a social media post.

“One of the advantages of working in the nursing profession is the ability to utilize the skills and knowledge anywhere you go; and also knowing that there will be learning improvements as you go,” she continued.

Earlier this week, the beauty queen and a team of medical professionals visited the villages of Vaimoso, Vaiusu, Vaigaga, and Vaitele Nuufou to follow-up on children who missed their scheduled immunizations.
Fonoifafo worked under the leadership of nurse Koreti Aiono and her team, and in doing so, she learned “as much as I could before stepping in as a vaccinator”.

“Thank you Koreti, Melissa, and Urita for allowing me to be part of your team, and for the education provided,” Fonoifafo said.

She added, “Going home at the end of the day knowing you were able to make a small difference in the lives of our people is rewarding. But what is more satisfying is knowing that you don’t do it alone. There are thousands of professionals playing their part in making Samoa a better, and safer place to live.”

Fonoifafo concluded, “I look forward to the many learning opportunities that will come as we continue this service for our country.”

Samoa was struck with a measles epidemic in September 2019; and as of Jan. 6, 2020 there were over 5,700 measles cases and 83 deaths. the majority of them children. A state of emergency was declared in November 2019, resulting in the closure of schools and cancellations of public gatherings while mass vaccinations were carried out. By Dec. 22nd, an estimated 94% of the eligible population had been vaccinated.