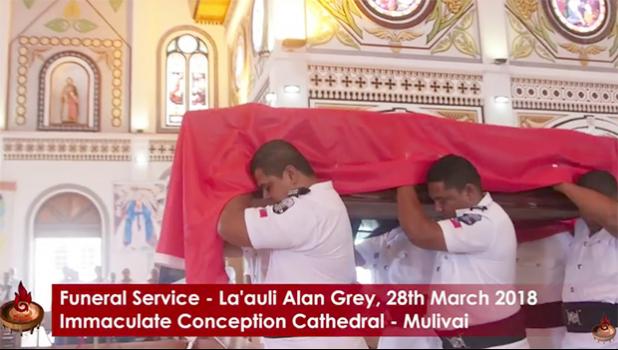 They will be wearing black armbands to honor La’auli celebrated as the man responsible for propelling Manu Samoa to the world stage single handedly.

“He’s an exemplary man,” are the compliments from Manu Samoa 7s Sir Gordon Titjens, who attended the funeral services yesterday with the Manu Samoa 7s to pay homage to one of Samoa’s greatest rugby icons. “He has left behind a huge pair of shoes to fill and as the man responsible for taking the Manu Samoa brand to the world, Samoa should be proud.”

Sir Gordon says it’s a sad day for Samoa and extended his condolences to the Grey family.

La’auli was a fatherly figure, a mentor, who provided the anti-dote of inspiration.

His impeccable involvement with the development of the Apia youth through rugby and fautasi racing in the 1970s and ‘80s was a god sends.

The brainchild behind the Kionasina fautasi longboat, the first local longboat to defeat the modernized design fautasi with their spoon like oars from American Samoa, La’auli resurrected pride into the youth.

For that, La’auli was and will remain a legend.

La’auli also provided much needed employment for the youth of Apia and neighboring villages who were not academically gifted through his family hotel business, Aggie Grey’s Hotel. And he also served as Counselor.

“His (La'auli's) unyielding strength of character became a beacon to hundreds of young people in many of the surrounding urban villages from Vaiala out to Apia and beyond. Some were already straying towards the path of criminal lawlessness when he came along and hauled them back to the straight and narrow,” wrote Newsline Newspaper.

“But this is only one of many more stories of an amazing man that he was known for and told by many who knew him or of him. He is gone. His passing is indeed a sad day for Samoa. He takes with him the love, respect and the gratitude of a grateful nation.

La’auli Alan Grey was truly one of a kind.

Yesterday, the Apia Maroons Sport Club with the blessings of the Village Council paid homage to their fatherly figure with Club President and Minister of Justice Faaolesa Katopau Ainu’u attending the funeral Mass for La’auli at the Catholic Cathedral of the Immaculate Conception, Mulivai.