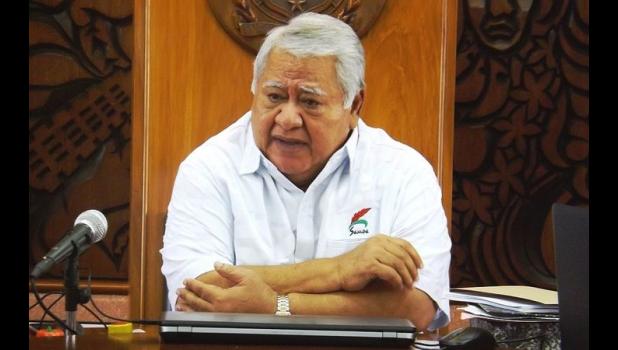 Prime Minister Tuilaepa offered the warning during his weekly media conference yesterday, responding to a call by Rev. Vavatau on the Government to cut spending.

The call was made on the front page of yesterday’s Samoa Observer.

“Leave politics to politicians. What? He (Rev. Vavatau) wants to be Prime Minister too?” Tuilaepa responded.

The Prime Minister said the General Secretary of the C.C.C.S. has crossed the line.

“I advised him previously not to bother with politics, he’ll drown in it. Leave politics to us who have been anointed by God to be politicians.”

Tuilaepa cautioned Rev. Vavatau that he would drown if he tries “to cross over to our side.”

The Prime Minister added that he’s tired of commenting on the issue of the taxing of Church Ministers.

The comments from Prime Minister Tuilaepa continues the longstanding dispute between the Government and the C.C.C.S. Church over the new law taxing the Church Ministers alofa.

The leaders of Samoa's largest church have suggested the government rein in expenditure as a way for pastors to avoid paying tax.

The general secretary of the Congregational Christian Church, Vavatau Taufao, has challenged Prime Minister Tuilaepa Sailele Malielegaoi to admit the government's finances are in a poor state.

The two have been embroiled in a war of words for more than a month after the government introduced a law requiring church ministers to pay tax.

Reverend Taufao told the Samoa Observer that the government was seeking extra revenue sources because it can't control its spending.

He also questioned the cost of the recently upgraded international airport.