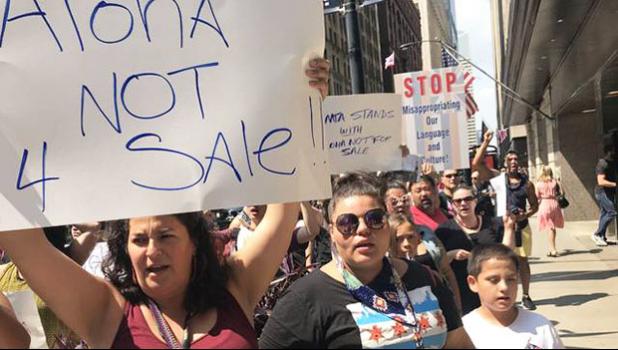 Protesters marched in front of the corporate headquarters of Aloha Poke company following reports that the restaurant company had sent cease and desist letters to Hawaiian-owned shops that had the words "aloha" and "poke" in their names.

Native Hawaiians say they won't let themselves be bullied out of their own culture by a corporation.

Aloha Poke company denies it had tried to trademark the words.  The company claims the campaign against it is based on “misinformation” and says that people are free to use “aloha” and “poke,” they just can’t combine them in a restaurant name.

“We fully support the expression of free speech and their right to protest in a peaceful manner,” Aloha Poke Co. CEO Chris Birkinshaw told the Honolulu Star Adviser.

About 200 Native Hawaiians and others protested at the event organized by the Aloha Center Chicago, an arts and culture organization, the Council for Native Hawaiian Advancement, and ʻIlioʻulaokalani Coalition, a political advocacy group led by kumu hula Vicky Holt Takamine, as well as the Office of Hawaiian Affairs.

The group of native Hawaiians shouted ‘Ku’e Aloha Poke,’ which means to oppose or resist Aloha Poke, and held signs that read: ‘Aloha is Not For Sale,’ as they stood at the entrance of a building on Clark Street where the mainland company operates one of its fast-food shops.

They also chanted and blew conch shells as bystanders watched and passed through the building, according to a post on OHA’s Facebook page.

The protestors hope to get the company to retract its cease-and-desist letters and issue a “true apology to the Native Hawaiian people.”

“We fully support the expression of free speech and their right to protest in a peaceful manner,” Aloha Poke Co. CEO Chris Birkinshaw said in response to today’s march.