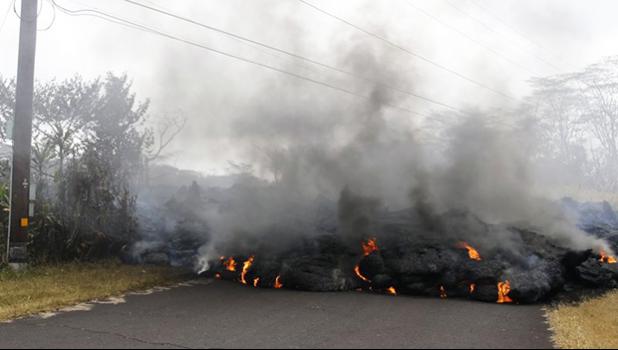 PAHOA, Hawaii (AP) — Fast-moving lava crossed a road and isolated about 40 homes Friday in a rural subdivision below Hawaii’s Kilauea volcano, forcing at least four people to be evacuated by county and National Guard helicopters.

The homes were isolated in the area east of Leilani Estates and Lanipuna Gardens — two neighborhoods where lava has destroyed 40 structures, including 26 homes, over the past two weeks.

Officials said three people were still in the area but not in imminent danger. They were advised to shelter in place and await rescue by helicopter first thing Saturday.

County officials have been encouraging residents in the district to prepare for potential evacuations.

Edwin Montoya, who lives with his daughter on her farm near the site where lava crossed the road and cut off access, said he was at the property earlier in the day to get valuables.

“I think I’m lucky because we went there this morning and we got all the batteries out, and all the solar panels out, about $4,000 worth of equipment,” he said. “They have to evacuate the people that are trapped up there right now in the same place that we were taking pictures this morning.”

He said no one was on his property, but his neighbor had someone on his land.

“I know that the farm right next to my farm . he’s got somebody there taking care of the premises, I know he’s trapped,” Montoya said.

Montoya said the fissure that poured lava across the road opened and grew quickly.

Experts are uncertain about when the volcano will calm down.

The Big Island volcano released a small explosion at its summit just before midnight Saturday, sending an ash cloud 10,000 feet (3,048 meters) into the sky. The U.S. Geological Survey’s Hawaiian Volcano Observatory said eruptions that create even minor amounts of ashfall could occur at any time.

This follows the more explosive eruption Thursday, which emitted ash and rocks thousands of feet into the sky. No one was injured and there were no reports of damaged property.

Scientists said the eruption was the most powerful in recent days, though it probably lasted only a few minutes.

It came two weeks after the volcano began sending lava flows into neighborhoods 25 miles (40 kilometers) to the east of the summit.

A new lava vent — the 22nd such fissure — was reported Friday by county civil defense officials.

Much of the lava that has emerged so far may have been underground for decades, perhaps since a 1955 eruption.

Meanwhile, more explosive eruptions from the summit are possible.

“We have no way of knowing whether this is really the beginning or toward the end of this eruption,” said Tom Shea, a volcanologist at the University of Hawaii. “We’re kind of all right now in this world of uncertainty.”

It’s nearly impossible to determine when a volcano will stop erupting, “because the processes driving that fall below the surface and we can’t see them.” said volcanologist Janine Krippner of Concord University in West Virginia.

U.S. government scientists, however, are trying to pin down those signals “so we have a little better warning,” said Wendy Stovall, a volcanologist with the observatory.

Authorities have been measuring gases, including sulfur dioxide, rising in little puffs from open vents.

The area affected by lava and ash is small compared to the Big Island, which is about 4,000 square miles. Most of the island and the rest of the Hawaiian chain is unaffected by the volcanic activity on Kilauea.

State and local officials have been reminding tourists that flights in and out of the entire state, including the Big Island, have not been impacted. Even on the Big Island, most tourist activities are still available and businesses are open.