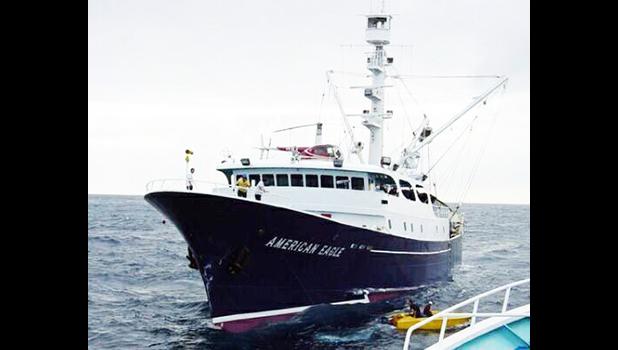 Pago Pago, AMERICAN SAMOA — In consideration for — among other things — refraining from arresting the fishing vessel American Eagle and dismissing a lawsuit pending in the High Court of American Samoa, owners of the American Eagle proposed a “Letter of Undertaking” as security to all claims filed by owners of fishing vessel Koorale, over the collision of the two vessels north of Pago Pago last year.

This is according to the latest filing by Koorale’s owners, M & F Fishing, Inc., a Nevada corporation, at the federal court in Tampa, Florida seeking $20.5 million against the defendants in property damage and consequential economic harm arising from a June 17, 2019 collision on the high seas, more than 1,000 miles from Pago Pago.

In its Dec. 11th filings, plaintiffs asked the federal court to be allowed to file an amended complaint against defendants to add an “in rem” claim against the American Eagle vessel, which is subject to in rem liability arising out of a collision. Additionally, the vessel itself is considered a separate entity that may be subject to tort liability.

(In rem is from Latin "against or about a thing," referring to a lawsuit or other legal action directed toward property, rather than toward a particular person.)

When this lawsuit was originally filed, the American Eagle vessel was physically located in the Pacific Ocean outside of the federal court’s jurisdiction. However, in October this year, owners/managers of the American Eagle tendered a Letter of Undertaking, in the amount of M & F Fishing's claim with interest, etc., and as agreed by M & F Fishing, according to the plaintiff’s court filings.

“The purpose of the Letter of Undertaking is to avoid the necessity of arrest of the American Eagle, and to stand in place and instead” instead of the vessel itself, the filing states.

“In consideration of your refraining from arresting, attaching, or otherwise detaining the Vessel or any other vessel or property of her Owner/Manager in connection with the Claims and dismissing the in rem claim filed in the High Court of American Samoa without prejudice,” the Letter of Undertaking states — among other things that any legal proceeding in connection with the claims arising out of the collision between the American Eagle and Koorale  shall be in the federal court in Tampa.

The Letter shows that final judgment can be put up to but not exceed $26.24 million — inclusive or interest and costs. And that the Letter secured the amount of the plaintiff’s lawsuit of $20.50 million

The federal court last week granted the plaintiffs motion to file an amended complaint against the defendants.