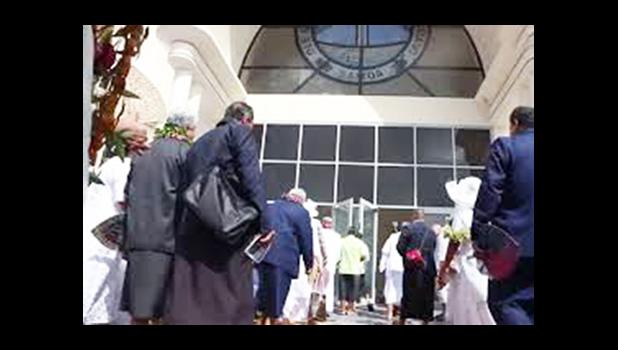 Apia, SAMOA — The Elders Committee of the Congregational Christian Church of Samoa (C.C.C.S.) is adamant.

They will not obey the demand by the Government for all Church Ministers to pay income taxes.

The law became effective in January 2018. Which means many of the Church Ministers of C.C.C.S. are breaking the law.

The Church is adamant that they will only agree after a discussion during their annual Malua conference next month.

This is according to the minutes of their meeting held on 14 March 2018.

A copy of the minutes has been leaked to the Sunday Samoan.

“It is understood the Church’s stance on this matter during the Fono Tele 2017, as indicated in a letter by the Church Ministers, is that we will not pay taxes,” the documents read.

“The Church has also appealed to the Government to consider the request until the Fono Tele in 2018.”

According to the minutes of the meeting, the denominations are asking the Elders Committee to consider the implication if the Government decides to prosecute Ministers for not obeying the law.

But the Elders Committee has insisted to leave the matter for discussion at the Fono Tele. It means that from now until May, C.C.C.S. church Ministers will continue to defy the Government.

Two weeks ago, Prime Minister Tuilaepa Dr Sa’ilele Malielegaoi said “no one is above the law”.

That was his response regarding Church Ministers who do not pay their taxes.

Last year, despite the strong opposition from the church, Parliament passed the Bill, taxing the Head of State and Church Ministers, for the first time since Samoa became politically independent.