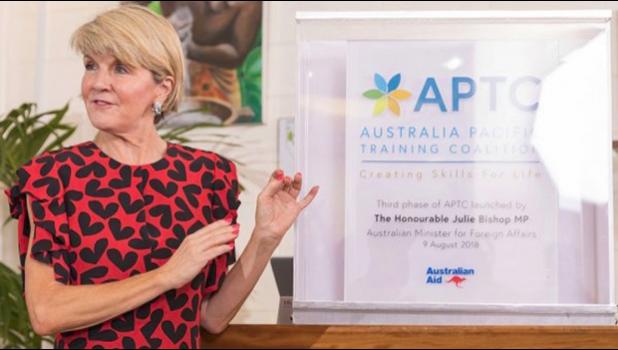 Sydney, AUSTRALIA — The new phase of the Australia Pacific Training Coalition (A.P.T.C.) may include linking up qualifications to work opportunities in Australia.

Australia’s Minister of Foreign Affairs, Julie Bishop, revealed yesterday she wants to work with Samoa to improve access to work for Samoans.

Australia and Samoa are working on a memorandum of understanding to integrate Samoa, and particularly students of the A.P.T.C. into Australia’s new Pacific labour scheme.

The scheme was launched last year and is a non-seasonal workers scheme currently being piloted in Kiribati, Tuvalu and Nauru.

Workers in the fields of aged care, hospitality and tourism are eligible for work visas of up to three years, and it is not limited to a certain time of the year.

Ms. Bishop said until now, Australia has seen over 100,000 seasonal workers from Samoa come to work in Australia, and much of their earnings return to the island in the form of remittances.

As well as linking up with labour pathways, Ms. Bishop announced the A.P.T.C’s new phase would include greater partnerships with national universities to open pathways to higher qualifications for students.

The A.P.T.C. is just one of the many ways Australia is supporting Samoans to work and become qualified. Ms. Bishop took time at the launch to emphasise the two countries close relationship.

Prime Minister Tuilaepa Sa’ilele Malielegaoi said the programme has enabled Samoans to have more choice in their careers, such as whether to work domestically or travel.

He said the partnerships focus of this new phase will be important in ensuring qualifications are meeting international and domestic training needs.