Growing up in the shadow of war: Soldiers reflect on 9/11 and the end of the war 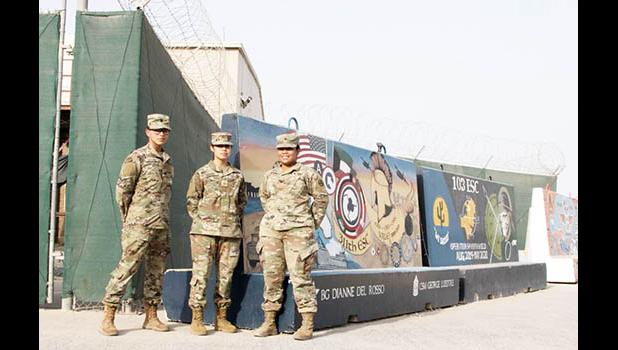 By
Sgt. 1st Class Mary Katzenberger
3rd Expeditionary Sustainment Command
Toa o Samoa Spc. Onosai Misionare said the terrorist attacks that occurred in the year of her birth have grown in significance for her as she has aged and chose to serve in the U.S. Army during a time of war.

CAMP ARIFJAN, Kuwait — When Spc. Miguel A. Martinez thinks back to when he first learned about the terrorist attacks on Sept. 11 attacks, he remembers feeling angry.

He is one of several 3rd ESC soldiers born the year the Global War on Terror kicked off who decided to enlist in the U.S. Army despite the fact the nation had been at war for their entire lives.

To mark the 20th anniversary of 9/11, Martinez, along with Pvt. 1st Class Janice M. Salazar and Spc. Onosai Misionare, took time out of their busy schedules supporting sustainment operations in more than 10 countries in the U.S. Central Command area of operations to discuss their thoughts on the Sept. 11 attacks and on choosing to enlist in the military during a time of war.

Martinez, a native of Corpus Christi, Texas, recalls initially hearing about 9/11 during his first-grade year of elementary school. He said his awareness grew in the third grade when he and his classmates watched videos and read books about the events.

"I would see a lot of testimonies of … family members that lost parents there," he said. "It was kind of enraging that someone out of nowhere would attack something like that."

Martinez said 9/11, along with a desire to bring about positive change in the world, led him to enlist in the Army on July 29, 2019, only eight days after his 18th birthday.

The self-proclaimed music geek—who plays the piano, drums, guitar, and the violin, as well as singing vocals—said the military service of one of his cousins, a soldier who deployed in support of Operation Iraqi Freedom, also played a factor in his choice to serve.

"He said it was so hectic," Martinez said of his conversations with his cousin. "He said he would feel pressured [and] constantly feel attacked and helpless at the same time."

Now deployed himself to Camp Arifjan, Kuwait, serving in support of military operations spurred by 9/11, Martinez said he has mixed emotions.

"Even though I’m supporting here, I feel like I could do more," he said. "I wish I could honestly help more in the front lines, but everything happens for a reason."

Salazar, also a paralegal specialist, said her reason for choosing to enlist during a time of war is because it is something she has always wanted to do. She said U.S. Army recruiting commercials she watched as a kid inspired her.

"I’m the first in my family to serve," the Los Angeles, California, native said. "I feel like I’ve always wanted to do something that helps people."

"Only certain teachers taught about it," she said. "Starting in high school, we talked about it more, and then they covered it every year."

The running enthusiast—who ran two miles in 13 minutes and 25 seconds during an Army Combat Fitness Test familiarization event—said she wishes she had learned more about Sept. 11 attacks when she was younger.

"I was only a couple of months old [when it happened] and I never experienced it, so it was kind of like that happened, so I didn’t have feelings towards it," Salazar said.

The 20-year-old said her connection to 9/11 has changed though since she enlisted in the U.S. Army on Nov. 17, 2020 and deployed here only a little over nine months later.

Salazar said the Aug. 26 attacks at Hamid Karzai International Airport that killed 13 U.S. service members and scores of Afghan civilians really drove the significance of serving in the military during a time of war home for her.

"There’s always a little fear," Salazar said. "But I know what I signed up for, that there is that chance of coming over here."

Misionare, a financial management technician, grew up nearly 7,200 miles flying distance away from New York City in American Samoa. The Soldier was less than four months old when 9/11 occurred.

"It was just a part of history to me, growing up," she said.

Like Salazar, Misionare said the terrorist attacks that occurred in the year of her birth have grown in significance for her as she has aged and chose to serve in the U.S. Army during a time of war.

She too was struck by the recent events in Kabul.

"The empathy is there for everyone who is living there right now and for those who couldn’t get out in time," Misionare said. "But we lost a couple of brothers and sisters doing it. I’m just glad that our brothers and sisters serving along with us are out, they’re safe and we won’t have any more casualties."

Martinez said this is a somber time for him as a Soldier.

"There was this quote that I shared—it was in Latin—but it pretty much stated that loyalty always comes down to victory when we are joined together," he said. "When I said that it was because of this time of despair, this time of us losing someone so precious to us … our battles.

"I feel like when one loses everyone loses at the same time," Martinez continued. "I just hope in the near future we all learn to appreciate each other for the little moments that we have, because in the end that’s all that matters."