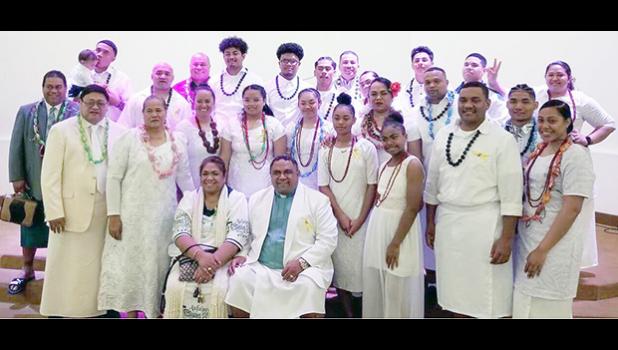 Las Vegas, NEVADA — On Sunday November 24, 2019, a “Toa O Samoa” church service was held at the Etena Fou Congregational Christian Church of American Samoa Las Vegas U.C.C., Nevada.  Its purpose was to commemorate all the “Toa O Samoa”, with an emphasis on those who were currently serving at Ft. Irwin, Barstow, California.

The congregation was honored with the presence of Samoans from Las Vegas, Ft. Irwin, as well as nearby military posts. Reverend Ailao Malepeai Tofaeono (Etena Fou CCCAS Las Vegas) led the service with the assistance of Retired Reverend Na’otala, Tony, Reverend Faletufuga, Salatielu, of the Matagofie o le Atua Church, and Reverend Kolose Fruean of Ft. Bliss, Texas. The service began with an enter to worship by Reverend Tofaeono, which was followed by a rendition of “Afio Mai Ia Iesu” sung by the Etena Fou CCCAS choir.

Continuing with his opening, Reverend Tofaeono emphasized the importance of service, and ways American Samoa has been able to exemplify this characteristic throughout the years, beginning with Marist Old Boys Association, and coming full circle with military service members who are dedicated to not only serving their country but more importantly, their God.

Recognition for the leadership and insight needed to implement this fellowship among “Toa O Samoa” and their families, was given to Chief Warrant Officer Three (CW3), Thomas Sorepa. Additional hymns were also sung by the choirs from Etena Fou CCCAS (Las Vegas), Ft. Irwin, and Matagofie o le Atua (Las Vegas).

After the beautifully sung hymns, Reverend Kolose Fruean then led the reading of the Gospel, while the pastoral prayer was subsequently recited by Reverend Faletufuga, Salatielu. Reverend Faletufuga, a US Navy retiree, went on to encourage the “Toa O Samoa” to always put God first, for He is the source of success. The sermon was then delivered by Reverend, Retiree, Sergeant Major Na’otala, Tony, who placed an emphasis on the significant role “Toa o Samoa” play in defending the United States and American Samoa. Reverend Na’otala, a US Marine retiree, then reminded the congregation and the “Toa o Samoa” that there is no greater love than that of an individual who is willing to lay down their life for a friend. A task that was preached and exemplified by our Lord Jesus Christ so that whoever believes in Him will not perish but have eternal life.

Reverend Tofaeono then ended the sermons with a further statement of encouragement to always put God at the forefront of all you do. Hence, the motto of our mother country, “Samoa, let God be first.”

The service was rounded off with a variety of skits performed by both the “Toa o Samoa” and the Etena Fou CCCAS youth group.  Sergeant First Class Tony Campbell Semeatu led the “Toa o Samoa” as they marched on stage to perform a skit about a young Samoan brother and sister who joined the United States Army to help provide for their family. It was a very moving performance that captivated the audience into a thunderous applause.

Etena Fou CCCAS youth Group also came prepared with an educational skit encouraging “Toa o Samoa” to always put God first, and never forget His unwavering love and grace. This was followed by their own rendition of the Moana: Know who you are song with actions dedicated to all the “Toa o Samoa”. Their finale was met with great appreciation, and loud applause!

The soldiers who attended the service from Ft. Irwin, Barstow, California are as follows:

The fellowship ended with a lavish luncheon for the soldiers and their families, hosted by Reverend Ailao Malepeai Tofaeono and the Etena Fou CCCAS Las Vegas.