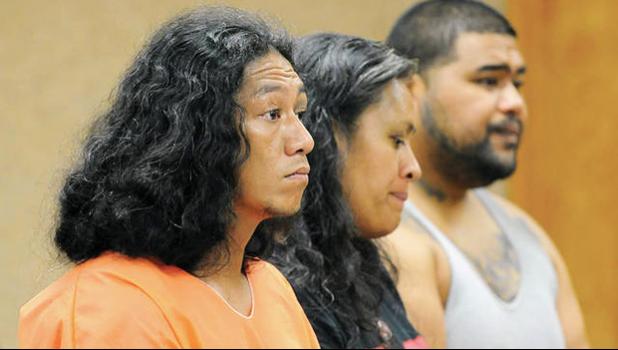 KEALAKEKUA — A preliminary hearing is scheduled for Friday for three suspects accused of beating a hotel security guard earlier this week.

The three are charged with second-degree attempted murder in connection with a near-death beating at about 12:30 a.m. Monday, when they allegedly got into a verbal confrontation with a security guard while parked at Kona Seaside Hotel. According to police, the confrontation escalated into the three individuals physically assaulting the guard.

Because of the severity of his injuries, the 63-year-old victim was flown to The Queen’s Medical Center on Oahu for further treatment. As of press time Wednesday, he remained in critical condition.

During Wednesday’s hearing, defense counsel Matthew Sylva requested that the $250,000 bail be reduced for each of the defendants. Samoa, 30, of Kona addressed Judge Margaret Masunaga in this request.

Samoa asked about getting supervised release. He agreed to be on house arrest to have the ability to go to and from work.

Deputy Prosecutor Chase Murray opposed the reduction in bail and supervised release, indicating the charge is serious and, if convicted, carries a long-term punishment, which makes him a potential flight risk.

Masunaga maintained bail at $250,000 for Samoa. However, she provided conditions if he did make bail, which were to check in with the Hawaii Intake Service Center, check in with his attorney once a week and appear for all court appearances.

The judge added the condition that Samoa not go within 300 yards of Kona Seaside Hotel or the victim.

Thirty-year-old Lauvao and 41-year-old Tautalatasi also appealed to Masunaga for supervised release or a reduction in bail as they both live in Honolulu and want to continue to provide for their families as their cases move forward.

Again, the judge denied their requests and bail was maintained at $250,000. The same bail conditions applied to Samoa would be applied to Lauvao and Tautalatasi if they were to bail out.

Masunaga scheduled a preliminary hearing for each of the defendants for Friday morning.