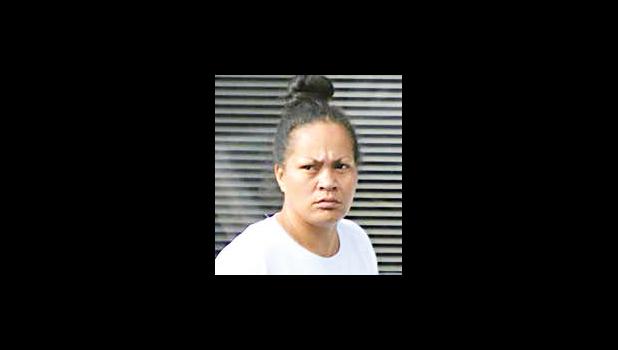 Pago Pago, AMERICAN SAMOA — The woman accused of trying to deliver a package containing a huge quantity of methamphetamine into the Territorial Correctional Facility (TCF) early last month is now in custody.

Ienisei Matautia was arrested by Detectives of the DPS Vice & Narcotics Unit over the weekend, and made her initial appearance in District Court yesterday morning.

She is being charged with one count of unlawful possession of methamphetamine, a class D felony, punishable by not less than 5 years or more than 10 years in jail, and a fine of not less than $5,000 or more than $20,000, or both.

District Court Judge Fiti Sunia has set bail at $10,000 and Matautia will appear in court next week for her preliminary examination (PX).

She is being represented by Assistant Public Defender Ryan Anderson while Assistant Attorney General Woodrow Pengelly is prosecuting.

If she is able to post bond, the court has ordered that she remain law abiding, not leave or attempt to leave the territory, and she has to surrender her travel documents to the government’s attorney. She is also ordered not to make any direct or indirect contact with all government witnesses.

Aside from the arrest warrant, there was a bench warrant signed by Sunia last month to arrest Matautia for failure to appear in court when her case was called. When asked about her whereabouts, the defendant said she was unaware of her court date.

Sunia told Mata’utia that if she posts bond, she has to comply with all the conditions set forth, including that she make all of her court appearances.

“If you fail to appear in court again, the court will issue another bench warrant and you will be held in custody without bail until your case is resolved. So, make all of your court appearances and stay in close contact with your attorney, Mr. Anderson,” Sunia told Matautia.

Samoa News initially reported on the alleged incident at the TCF after receiving a tip from a reliable source.

During the time of the investigation, police were able to interview TCF officers who worked the morning shift on Wednesday, Aug 1, 2018 when the alleged incident occurred, along with the male inmate who was supposed to receive the package.

The government claims that on the day in question, the TCF contacted the Vice and Narcotics Unit regarding the matter.

It was revealed during the investigation that during the early morning hours of Aug. 1, a woman stopped by the TCF front gate at around 3a.m. to drop off a package for a male inmate. The woman was later identified as the defendant.

According to the government’s case, Wednesday is “Drop Off Day” at TCF, when families are allowed to drop off food, clothes, etc. for loved ones serving time, and drop off is between 8a.m. and 3p.m.

In this particular case, the drop off was made 5 hours ahead of the actual scheduled time. This was one of the reasons why police officers on the morning shift at the TCF became suspicious of the package.

The government claims the inmate who was supposed to receive the package informed one of the new police officers who was on duty that morning that a family member was coming to drop off his clothes and food. The inmate then asked the cop if he could deliver the package to his room.

Without knowing anything about the package, the new prison guard went to the TCF front gate and allegedly accepted the package from a woman.

While making his way past the TCF front office, a senior cop saw the newbie with the package, and called him to bring back the package to be checked.

The package was a large sized cereal box, and inside was fresh milk, a tank top, and a clear plastic baggie containing the meth that was tested.

One of the things detectives were trying to figure out during their investigation — is if there was collusion between the woman, the male inmate, and the new prison guard who received the package.

Police interviewed the male inmate and according to him, he was expecting a bag of clothes from his family, but not from this woman. He told police he never had any contact with the defendant regarding the stuff in the confiscated package.

The male inmate is one of three who were arrested earlier this year in June when DPS detectives executed a search warrant on a house and vehicle in Petesa.

He is charged with one count of unlawful possession of methamphetamine and his case is still pending in High Court.

Police were unable to immediately locate Mata’utia when they received the arrest warrant from the court to arrest her for this case.