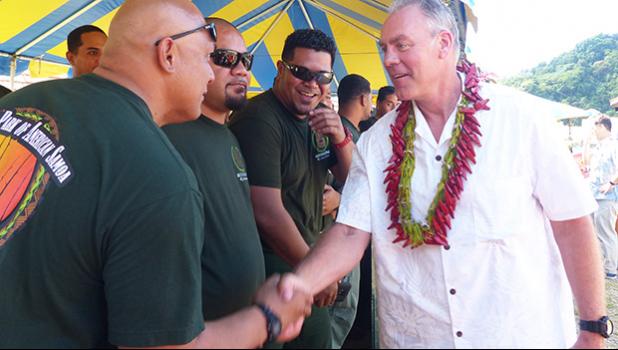 Pago Papgo, AMERICAN SAMOA — U.S Secretary of Interior, Ryan Zinke promised to “deal with your hospital” — referring to LBJ Medical Center — during his special remarks yesterday at the Suigaula o le Atuvasa Park, where it was also revealed that local leaders had bestowed on him, the chiefly title “Fofoga-o-Samoa”.

Also traveling with Zinke were US Army Lt. General Bryan Fenton, the Deputy Commander of the U.S. Indo-Pacific Command, and representatives of other federal agencies including the White House.

Gov. Lolo Matalasi Moliga led the local delegation represented by all three branches of government, Congresswoman Aumua Amata, as well as traditional leaders and a handful of lawmakers, in welcoming Zinke at the Pago Pago International Airport.

Zinke stepped off the plane, dressed in a white shirt and traditional Samoan wraparound for men, or ie faitaga, to the sound of Samoan music followed by dances by the Tafuna High School swing choir.

Locals as well as the visitors all stopped for a few minutes to watch the performance, before heading into the Airport VIP Lounge, accompanied by some of the Samoan ranking chiefs, including Attorney General Talauega Eleasalo Ale and Police Commissioner Le’i Sonny Thompson, who were bare-chested in their traditional chiefly wear.

Inside the VIP Lounge, the governor welcomed Zinke and his delegation to the territory, which Lolo said is some 11,000 miles away from Washington D.C., and has so many issues.

“We are away from the limelight, we are away from the mainstream, but we still maintain a decent American lifestyle...in American Samoa,” Lolo said, and thanked the delegation for taking time to stop in the territory. “I know this is a privilege and honor for our people to host you this morning.”

Lolo informed Zinke that Domenech and Pula have “been doing a good job working with us in the territory, although we have a lot of issues to focus on, but this morning we’re very privileged and honored to have you as our guest.”

The governor went on to introduce all the local leaders, who were present inside the VIP Lounge, while the Tafuna HS Swing Choir continued singing in the airport departure area.

He said that what the delegation will witness in the territory during their tour is what the United States has developed in the last 118 years — since 1900.

From the airport, the local and federal officials traveled — via motorcade — to StarKist Samoa, where cannery management and workers were out in full force. StarKist Samoa official Taotasi Archie Soliai offered briefs remarks, as Zinke stepped out of his motorcade. Taotasi  presented gifts of canned tuna to the delegation.

Zinke in return offered a response before quickly moving on to shake hands with cannery workers who cheered the delegation.

From the cannery, the motorcade returned to Su’igaula o le Atuvasa at Utulei Beach where the traditional 'ava ceremony was held, followed by Zinke going out into the crowd to shake hands with the public, especially the local firefighters of the National Park of American Samoa, who recently returned from helping fight forest fires in California.

Prior to lunch being served, Lolo addressed the audience saying, “America Samoa is very privileged and honored” to host Zinke, Fenton and the federal delegation, who are on island representing the United States President and the federal government, “bringing Washington close to our homes.”

“Times are not easy at all. Governments are getting tougher and tougher,  but when we stand together, it makes things easy for us,” he said and called on everyone to give Zinke, Domenech, and Pula the “support that they need so they can help us improve the lives of our people and our community.”

According to the governor, there will be a time in the future for a local delegation to travel to Washington D.C.  “to address issues we feel are important to the lives of our people.”

The governor thanked everyone present for coming out to welcome Zinke and his delegation, and acknowledged the presence of local military veterans and senior citizens in the audience.

In his remarks, Zinke extended a “greeting” from the US President and “his warmest regards to American Samoa” saying that the President “wanted also to express how important American Samoa is.”

“You’ve often heard that America is the beacon on the hill, but American Samoa really is the lighthouse inthe  sea,” said Zinke to applause from the crowd.

As a military veteran, “I honor our veterans from American Samoa for your sacrifice and thank you.” This resulted in another round of applause, as Zinke acknowledged the local National Park firefighters, who were called the “most famous ones” saying, “you made American Samoa proud.” And they stood up to be recognized.

He also acknowledged that he is “deeply honored” for being bestowed the Samoan chiefly title of “Fofoga-O-Samoa” which was made during the ava ceremony — “to be your champion and your warrior. And I don’t take it lightly.”

“As a former Navy SEAL commander, I understand what a warrior spirit is. I tell you, it makes my heart feel joy, when I see the culture is strong in American Samoa. The people are warm and the spirit of a warrior lives,” he told the audience, which included those watching live on KVZK-TV.

He recalled what the governor had said earlier in the day that this trip wasn’t about issues faced by American Samoa.

“It is a trip to understand and let you know, that while we have great military force [in] the Indo-Pacific Command with over 400,000 troops in this theater, all of that doesn’t matter unless we have an economy that’s prosperous,” he said.

“An economy of prosperity begins here,” said Zinke, who noted that his responsibilities are the US territories. “And we all share this, we want a prosperous, a strong American Samoa where we can show the world that our values matter.”

“Our values of freedom — which is not free — open seas, choices, good education — and yes — we’re going to deal with your hospital,” he said to cheers and applause from the crowd.

Pula offered very briefs remarks, extending appreciation and thanks from Zinke to local leaders for bestowing on the Interior Secretary, the chiefly title “Fofoga o Samoa”.

As the Talking Chief (or spokesperson) for Fofoga-0-Samoa, Pula told the audience that Zinke knows that DOI and its Office of Insular Affairs, helped with financial assistance to build the large traditional Samoan fale at Suigaula o le Atuvasa.

Entertainment during lunch was provided by the Malaeloa Methodist Youth Group and during some of the traditional Samoan dancing, Zinke, Pula, and Fenton joined in.

There was a presentation from Zinke and in return, ASG presented Samoan sua gifts to the visitors.

See more photos in slideshow and on our Facebook page.