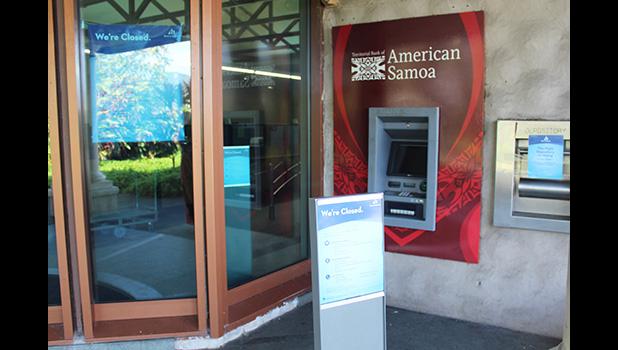 Pago Pago, AMERICAN SAMOA — The newest ATM for the Territorial Bank of American Samoa (TBAS), is located at the entrance to the former Tafuna branch of Bank of Hawaii. TBAS is taking over the facility, after BoH officially closed its local operation at the close of business last Friday, Aug. 16, 2019.

BoH has posted notices on the door, as well as a separate sign (in front of the ATM), informing customers of the closure and advising them — who continue to bank with the Hawaii-based financial institution — of the options available, including online banking.

When asked when TBAS plans to start operating out of its Tafuna branch, bank president and chief executive officer, Drew Roberts told Samoa News, “We are in the process of occupying the building, including establishing connections with all our processors and installing equipment. This will take the better part of a month to establish and test.”

Roberts said TBAS will be announcing limited products and services, as soon as the bank gets a good idea of when it will be ready. And this will begin with the ATM in the building.

“We anticipate this to be up and operational soon after we take official possession. We will operate the Tafuna branch with as many as 7 employees,” he said, adding that TBAS will provide “a schedule as soon as we have one organized.”

In a memo last week, the governor invited cabinet members to attend the ceremony, “so we can collectively express our deep sense of gratitude and gracefulness for nearly 50 years of service that Bank of Hawaii has rendered to our territory and our people.”

Lolo said that BoH has “graciously gifted all of its physical assets to the government, which will, in turn, be invested” in TBAS. He called on cabinet members to attend the ceremony “so we can say farewell to our long time partner.”

By Monday morning, the Territorial Bank of American Samoa (TBAS) sign and logo was posted on the front section of the former BoH Tafuna branch, in the industrial park — that will now serve as the TBAS Tafuna branch. [photo: FS]