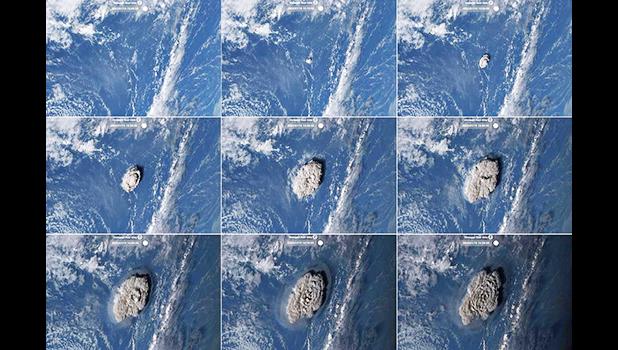 Wellington, NEW ZEALAND — There is significant damage to the western coast of Tonga's main island of Tongatapu.

The New Zealand High Commission says the damage is centered along the western coast, where there are many resorts, and the waterfront of the capital, Nuku'alofa.

A thick layer of ash remains blanketed over the capital.

Authorities are working to establish communication with smaller islands "as a matter of priority", the commission said.

The commission advised any New Zealanders in Tonga to register with www.safetravel.govt.nz, and urged them to follow advice from local authorities, including any tsunami evacuation orders.

The Defence Force carried out a surveillance flight of the islands yesterday. Plans are underway for a humanitarian relief flight when conditions allow.

HOW BEST TO SUPPORT TONGA

Aid agencies have been meeting to discuss a plan of action to provide relief to people affected by the tsunami in Tonga and the Lau Islands of Fiji.

International NGO's including Save the Children will be lead by the UN Co-ordination of Humanitarian Affairs in a meeting today.

Save the Children Fiji chief executive Shairana Ali said they were planning on how best to manage and provide fresh drinking water food and psycho-social support .

"All the stakeholders are going to be discussing the respective plans and to come up with a collective response, not only for Fiji but for Tonga and to get an update from the ground to get an appropriate response."

She said the response may have to be co-ordinated remotely in the case of another eruption.

The families in Tonga are at risk of exposure to unsafe air and water due to ash and smoke.

Satellite images indicate that the eruption has emitted a 5 km-wide plume of ash, steam and gas, rising about 20km above the volcano.

Tonga's government has asked the public to wear masks and use bottled water for now.

"There is significant threat to food security and also to water sources in Tonga and so the immediate need right now for people in Tonga is that they need food and clean water."

She said information coming out of Tonga was still scarce due to sporadic communication and phone lines being down.

Oxfam is confident their local team and other local humanitarian groups in Tonga will be able to provide an initial immediate response to support people with food and drinking water.

Oxfam have filtering units in Tongatapu which can turn salt water into drinking water and it's likely teams on the ground will already be responding.

"They do have units that could filter water from the ocean. They may have capacity to filter more or less 10,000L an hour which could be at some point enough to at least provide drinking water."

Calderόn said they could also help with food security.

UNICEF is ready to transport its pre-positioned emergency supplies from Fiji and Brisbane warehouses.

These include essential water, sanitation, and hygiene kits, water containers and buckets, water field test kits, tarpaulins, recreational kits, and tents, that can be immediately mobilized for distribution.

With borders closed in Tonga due to the ongoing Covid-19 pandemic, UNICEF will work with the Tongan government and its partners on the ground to reach children and families with the support they urgently need.

More than 80 percent of households in Tonga grow crops to meet their daily needs.

Tearfund chief executive Ian McInnes said they would be responding immediately to the need for clean drinking water and tending to damaged crops.

Aviation warnings continue to be issued by Fiji Meteorological Service.

Senior forecaster Sakeasi Waibute said he had been unable to reach his colleagues in Tonga, but he was still issuing warnings.

He said the Tsunami warning remained in place for Tonga and would not change until the official word comes from local authorities.

But it has been cancelled for Fiji at this moment.

He said Fiji's Lau group was still being inundated by surges, but it was unclear exactly what the latest was with communicating issues still hampering Tonga.

Early data from Tonga's violent volcanic eruption suggests it is the biggest since Mount Pinatubo in the Philippines 30 years ago, volcanologist Shane Cronin says.

The eruption of the underwater Hunga Tonga-Hunga Haʻapai volcano, about 65km north of Nuku'alofa, on Saturday shot thick ash and steam 20km skywards.

University of Auckland volcanologist Professor Shane Cronin said scenes on the ground would have appeared apocalyptic after the eruption: ash clouds blotting out the sun, thunderclaps of booming shockwaves and thousands of lightening strikes.

"The clouds that people could see in the distance, the booming noises and then the waves coming from the first tsunami...The next step is when the ash clouds spread across Tongatapu, and that ash cloud is so dense with fine ash particles that it blocks the sun completely, so it gets really dark."

Cronin said rain, small pebbles and many centimetres of ash would have rained down.

"This is an eruption best witnessed from space," he said.

The ash clouds ballooned over the island after the eruption, forming an umbrella with a diameter of 260km.

"The large and explosive lateral spread of the eruption suggests that it was probably the biggest one since about the 1991 eruption of Pinatubo," Cronin said.

He said early data suggested the eruption could measure as high as five on the volcanic explosivity index (VEI).

The index estimates the strength and potential impact of an eruption on an eight-point scale, with each successive interval representing a tenfold increase in energy.

Cronin said a VEI-5 eruption would happen once or twice in a decade globally.

The Mount Pinatubo eruption, which had a VEI of six, pumped 15m tonnes of sulfur dioxide into the atmosphere and cooled the earth by one degree for the next year and a half.

Cronin said Tonga's water supply and agriculture could be severely affected in the fallout from the eruption and international aid will be critical.

Cronin said as well as being a health hazard, volcanic ash could produce acid rain and leachates which can destroy crops.

"The acid associated with the volcanic ash can burn the leaves of crops, leafy vegetables, things like that.

"It's pretty bad for a lot of crops, particularly broadleaf crops - bananas and squash, things like that.

"Acid rain can cause the burning of plant leaves and so on, as well."

He said drinking ash-contaminated water could cause an upset stomach and health issues.

Most tsunami are triggered by underwater earthquakes, and only about 5 percent of historical tsunamis have been caused by volcanic eruptions, she said.

"We haven't seen a volcanic tsunami of this magnitude in over 100 years," she said.

"This is pretty much shattering the mould. One of the tricky things about tsunamis is that they happen very infrequently; think about the Japanese tsunami and its predecessor was over 1000 years beforehand.

Lane said the only similar volcanic tsunami event was Indonesia's Krakatau eruption in 1883, which killed tens of thousands of people and obliterated the island.

Atmosphere pressure disturbances from the volcano saw sea level disturbances recorded across the Pacific afterwards, including in New Zealand, where tsunami waves higher than one metre above sea level were recorded in areas including Warkworth and the upper reaches of Waitemata harbour.

"Tsunami scientists are literally going, 'Wow', about this," Lane said.