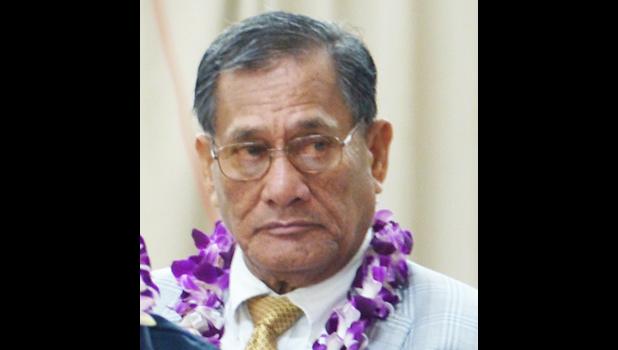 Pago Pago, AMERICAN SAMOA — As expected, the Senate has rejected amendments the House made to a Senate bill, which seeks to hike the tobacco tax by 3 cents and reduce the 2% wage tax to 1%, and the Senate is calling a conference committee with the House to discuss the changes.

Prior to approving the Senate bill in final reading last Friday morning the House amended the legislation by completely repealing the 2% wage tax, keeping the 3 cent tobacco tax hike but for this revenue to go into the general fund instead of to LBJ Medical Center. (See Samoa News edition Feb. 26th for details of the House debate.)

Senate Budget and Appropriations Committee chairman, Utu Sila Poasa called a committee-of-the whole yesterday morning to get opinions and views from senators on the House amendments, after the bill was returned to the Senate on Monday this week.

Utu shared his view with his colleagues saying that he opposes the amendments and suggested a conference committee to discuss the House changes. This was echoed by other senators.

Sen. Magalei Logovi’i, who sponsored the bill, said a conference committee would give an opportunity to the House to explain their reasons behind the amendments.

Sen. Malaepule Saite Moliga agreed with Magalei saying that the Senate had reduced the wage tax to 1%, which would still provide financial support for LBJ Medical Center, which needs local revenues for matching funds for federal grants.

If the entire 2% wage tax is repealed, the Manu’a senator questioned where LBJ will get additional local revenues for its matching funds. He noted that the House has made the claim that LBJ is getting more COVID-19 money and other federal grants, but that still does not address the issue of matching funds.

He said lowering the wage tax to 1%, will lessen the burden on all wage earners who pay this tax.

During a House hearing last week on the Senate bill, Rep. Vailiuama Steve Leasiolagi detailed the funding currently received by the hospital and emphasized that federal grants from sources such as Medicaid now require a much reduced local match. The hospital is also receiving COVID-19 grants. He said this should be enough to cover the 2% wage tax revenue if the tax is repealed. He further stated that it’s about time to repeal this 2% wage tax and faipule should understand the history behind this 2% wage tax.

The conference committee of the Senate and House will be held later this week.

Under the original language of the Senate bill, about $1.5 million would be collected from 3 cent tobacco tax and $1.5 million under the 1% wage tax.