“Samoan Clipper” search underway this week — it crashed 80 years ago 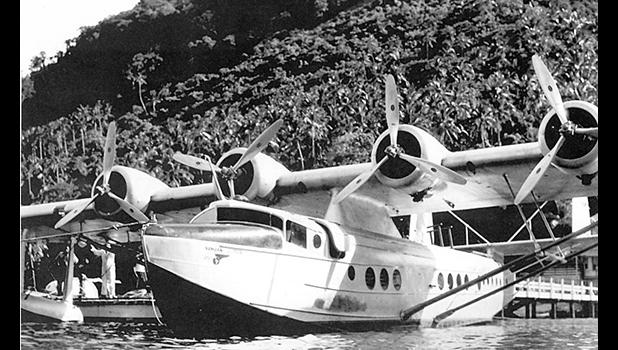 Pago Pago, AMERICAN SAMOA — With the assistance of the exploration vessel, EV Nautilus, the US-based Air/Sea Heritage Foundation is launching this week the search of Pan American Airways’ SKORSKY S-42 flying boat, called the “Samoan Clipper”, which crashed off Tutuila waters some 8 decades ago.

The remains of pilot Ed Musick and six crew members  as well as the aircraft itself was never found, while efforts have been made by the Foundation in the last five years to launch the search, which would locate, identify and document wreckage of the Samoan Clipper.

“Together we will write the next chapter of this story, give it to the world, and hopefully bring a sense of closure for all of the family members, near and far,” wrote the Foundation’s president and co-founder Russ Matthews in update stories of the “Search for Samoan Clipper” shared on the website of Pan Am Historic Foundation - which focus on preserving the legacy of the once globally well-known Pan American World Airways.

The Nautilus, which sailed into Pago Pago Harbor last Friday, amid a cloudy morning, will not only work on the Samoan Clipper search this week but will be on a separate expedition for the National Marine Sanctuary of American Samoa (NMSAS) next week, according to the 2019 Expedition Calendar for the Nautilus on its website (nautiluslive.org)

Exploration vessel, EV Nautilus sails into Pago Pago Harbor after 8a.m. last Friday. The ship is part of an expedition called “Searching for Samoan Clipper” flying boat, which when down off Tutuila waters 81-years ago, killed all seven crew members onboard the Pan American Airlines owned craft.  [photo: FS]

Matthews wrote in a July 5th story that the “search for Samoan Clipper will begin in earnest and I find myself looking back at the more than five years of effort that has led to this point.”

And in the past years, “we have learned a tremendous amount in that time” — such as a wealth of information about the circumstances that contributed to the fateful accident; and clues to where it may ultimately be found.

“However, in pouring over all of this data, one particularly poignant realization stands out above all others; that for the people of Pan American Airways, this tragic incident was not merely business, it was family.

The last story posted by Matthews was on July 11th as his team gathered in Los Angeles heading Honolulu, en route to Apia, Samoa, where the project will be based.

Matthews, along with the Air/Sea Heritage Foundation team is partnering with Ocean Exploration (OTE), which owns the Nautilus, as well as SEARCH, INC. He is also working closely with the Pan Am Historical Foundation to, among other things, provide regular updates of the search and survey.

“If successful, the survey will characterize a site of major archaeological importance and determine the last resting place of seven aviation pioneers while collecting conclusive evidence as to what lead to their fate,” he wrote.

According to Matthews, the project will base out of Apia and conduct search operations off the northwest coast of Tutuila Island for six days aboard OET’s state-of-the-art science ship E/V Nautilus from 15-20 July 2019.

Sonar and video data will stream directly from the ship via satellite, allowing anyone with an internet connection to follow the investigation in real time by logging onto http://www.nautiluslive.org

As the Nautiulius docked at the Port of Pago Pago, people around the world following the expedition watched a live stream on line through the ship’s website. “The team is in Port of Pago Pago for the Search for the Samoan Clipper expedition,” the message on the page read.

This screen shot taken off a a live webcam feed, broadcast online worldwide from onboard the exploration vessel, EV Nautilus around 11:30a.m. last Friday while docked at the Port of Pago Pago. There are three channels from cameras onboard the vessels providing the live feed. The ship is part of an expedition called Searching for Samoan Clipper flying boat, which when down off Tutuila waters 81-years ago. [photo: FS]

Read details of Matthews stories and updates on www.panam.org - and click on section - Search for Samoan Clipper. The stories also gave background on the Samoan Clipper flight, an insight of telegrams transmitted at the time, when the plane went down.

According to the Nautilus information, the main objective of this expedition is to acquire baseline information on deep-sea and mesophotic habitat in American Samoa, with a special focus on the NMFS.