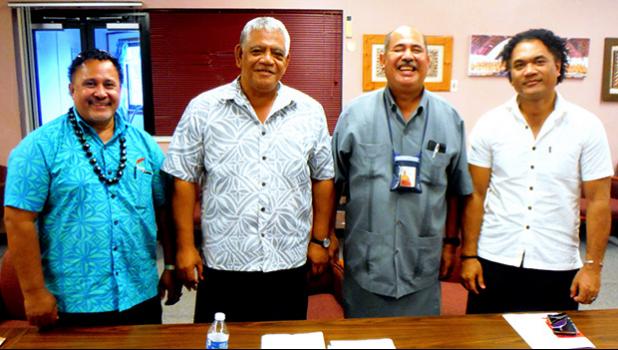 Pago Pago, AMERICAN SAMOA — The recent invasion of the little fire ant on Tutuila is causing concern not only in American Samoa, but also in neighboring Samoa. The extensive links and movement of people and goods between the two Samoas create a risk that the ant could accidentally be transported over to Samoa.

In response, the Samoa government has placed restrictions on imports of some items from American Samoa, and has asked for the public in Samoa to help in reporting any possible incursions of little fire ant into the independent state.

In early February, a fact-finding mission from Samoa visited the American Samoa Community College – Agriculture, Community and Natural Resources (ASCC-ACNR)/Land Grant division entomology laboratory to learn about the status of the little fire ant in the territory and efforts to contain and eradicate it.

On the first of their two-day visit, ASCC entomology staff briefed the visitors on the extent of the infestation, which at present remains confined to the Tafeta area. Metotagivale Meredith and Neil Gurr of the ASCC-ACNR demonstrated methods they use for little fire ant detection and delimitation surveys. In addition, the staff demonstrated the control measures to be used against the little fire ants, including the application of granular and gel-based insecticidal baits.

On their second day in Tutuila, the visitors from Samoa were able to see the little fire ants up-close in the field and in the lab to observe how they differ from other ant species present in the islands. ASCC-ACNR entomologist Dr. Mark Schmaedick stressed the importance of helping the public understand the difference between the tropical fire ant (loi mumu) which has been widespread in American Samoa for many years, and the much smaller little fire ant (loi afi la’itiiti) which is new to the territory.

It is very important for the public in both Samoas to report any suspected infestations of the little fire ants, so they can be stopped before they spread.

In addition to learning about American Samoa’s efforts against the little fire ant, the visitors shared with their ASCC hosts the steps that the Samoa government is taking to prevent the spread of the ant to Samoa, to educate the public about the threat, and to respond in case the ant is discovered in the country.

In closing the meeting, ASCC president Dr. Rosevonne Pato thanked everybody for their contributions in the effort to contain the little fire ant, and expressed her belief that continuing effective communications and information sharing between the two Samoas will be essential to fighting this latest threat to the islands’ environment, agriculture, economy, and way of life.

Anybody wishing to report possible infestations of little fire ant is encouraged to contact ASCC-ACNR/Land Grant at 699-1575 or the Department of Agriculture at 699-1327.