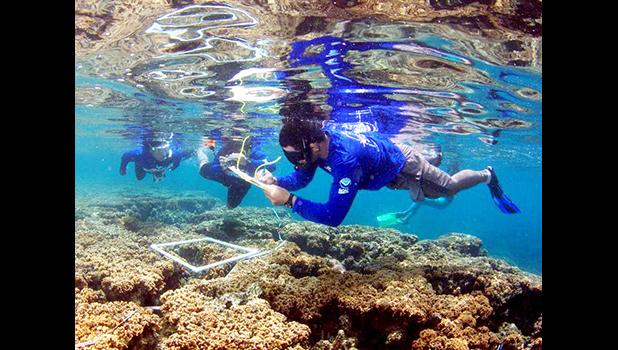 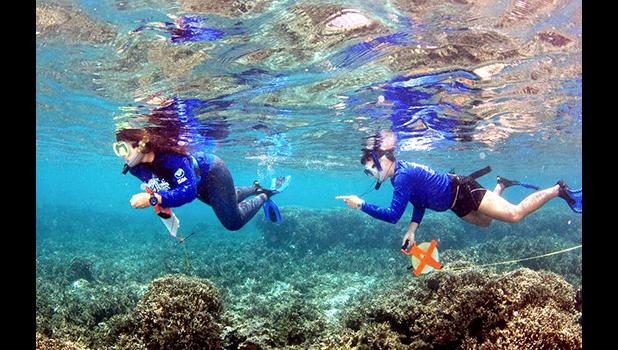 Pago Pago, AMERICAN SAMOA — From those who have long harvested from the sea, we hear the same sad tale over and over: “The fishing was so much better when I was young!”  How can we begin to change this downward trend?  One answer is to build local capacity in Marine Science, where traditional knowledge is blended with modern science.  This is exactly what ten students in the American Samoa Community College (ASCC) Marine Science Program learned last week in the Quantitative Underwater Ecological Surveying Techniques (QUEST) field course, a component of the class MSC 280, Marine Science Special Projects. The QUEST course took place from March 11th -15th in Nu’uuli uta, with surveys conducted in the nearshore backreef.

The students were joined by two ASCC faculty, Meagan Curtis and Kelley Anderson Tagarino, along with University of Hawai‘i at Manoa Marine Option Program Coordinator Jeffrey Kuwabara, and National Ocean & Atmosphere Administration (NOAA) Pacific Islands Fisheries Science Center Outreach and Education Coordinator Ali Bayless.  Staff representing many local agencies, including the National Marine Sanctuary of American Samoa (NMSAS), Rose Atoll Marine Monument, the Coral Reef Advisory Group (CRAG), and the National Park of American Samoa (NPSA), donated their time to help the QUEST students gain new skills in monitoring the health of our coral reefs and reef fish.  By the end of the week, all the student participants agreed they had gained a great deal of knowledge and ability related to coral reef health and monitoring.

“QUEST is a great training program and had a ‘domino effect’ in my life,” said Territorial Watershed Coordinator Fa’asalafa Kitiona. “Through QUEST, I gained skills in demand for field studies, which allowed me to participate in more opportunities at the University of Hawaii.” She went on to say, “QUEST taught me how to apply what I’d learned, collect and analyze data, and present my findings in public – something I used to hate, but now have grown comfortable doing.” Valentine Vaeoso, another past QUEST and ASCC Marine Science alumni now working as a marine bio technician at the NPSA said, “When I first signed up for a Marine Science class, I didn’t know much about it, but my friend convinced me to try it and we ended up with the top scores for our project, which meant we were selected to travel to Hawaii to present our results at a conference.  I was pretty scared, as I hated public speaking, but our instructor Mrs. Tagarino helped us become more confident, and that really helped me later in life.”

Three more previous QUEST students, Alphina Liusamoa, Fuamai Tago, and Raijeli Toanivere, returned this year to participate as QUEST team leaders, acting as mentors and guiding the current QUEST group through the week of intensive studies. By mentoring first-year QUEST students, the program alumni improve their own leadership skills and reinforce their knowledge of surveying techniques through teaching them. Aveipepe Fua, a first year QUEST student, said, “QUEST was a lot of hard work, but I also had fun. I learned so much – not just survey skills, but data and time management skills too!”

The American Samoa QUEST is modeled after the highly successful course of the same name offered by the University of Hawai‘i at Hilo. The local QUEST has students using snorkels and masks rather than SCUBA gear like the University of Hawai‘i does. Though the gear is different, the methods and science learned are the same. Students spend the week studying methods for counting fish, algae, corals, and other invertebrates, having first learned to identify 170 species by their scientific name prior to taking QUEST. After studying each method, they take to the water, working in groups to collect the data to answer a research question each of the groups has come up with. Each group then analyzes and presents their findings at the end of the week. The intense workload of this field course led the students to push themselves to learn many new techniques in a short period of time, which mimics the reality of field work in Marine Science.

Additional local agencies who donated time, materials, and services to make QUEST possible included the Office of the Governor, ASCC-ACNR, the UH Manoa Marine Option Program, and Nu’uuli Village. The QUEST instructors extend their appreciation to NOAA PIRO and the NSF-ATE program run by Dr. Robert Richmond at UH Manoa, both of which funded the American Samoa QUEST program this year. On behalf of the Hawai‘i Sea Grant College Program, ASCC and ACNR, the instructors sincerely thank these sponsors for making QUEST possible.

The QUEST course will continue to be offered every year over ASCC’s Spring Break, which is the second week of March. Those interested in participating as students or sponsors can contact Kelley Anderson Tagarino at 699-3353 (office) or 258-2967 (cell), by email at KelleyAT@Hawaii.edu, or via post at P.O. Box 2609 for more information.