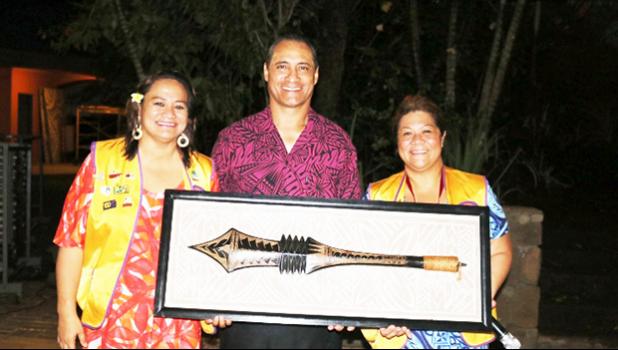 PRiMO brings together over 150 delegates to channel efforts towards common goals to build community resilience in American Samoa, this includes looking at lessons learnt from past disasters with a special panel.

Lt. Gov. Lemanu Peleti Mauga (far left) was among the speakers on opening day, while former Gov. Togiola T. Tulafono (second from right) was the speaker yesterday, where he spoke about the Sept. 29, 2009 that claimed the lives of 34 local residents, and the importance of partnership with the feds and others.

These are some of the participants and speakers pictured yesterday during the final day of the two-day Pacific Risk Management `Ohana (PRiMO) meeting, which opened Tuesday at the ASCC Multi Purpose Center. [photo: Leua Aiono Frost]

Togiola, who was governor at the time, was in Honolulu when the earthquake followed by the tsunami with towering waves came ashore of Tutuila just after 7a.m. Togiola quickly worked with federal partners for emergency relief and aid for the territory and arrived about 48-hours later onboard a military aircraft, once the runway at Pago Pago International Airport was cleared, with the first federal supplies.

He also worked with FEMA and other federal partners to secure temporary large generators for the territory, because the tsunami had destroyed the Satala power plant. He called the tsunami the worst natural disaster in American Samoa’s history.

The event, which ends today, is open to the public.

Several individuals were honored during a special reception and awards ceremony held at the Tradewinds Hotel in conclusion of the first day of the Pacific Risk Management `Ohana meeting in American Samoa.

The awards recognised and rewarded individuals who exhibited exceptional leadership during the 2009 tsunami which struck American Samoa.

This week marks the tenth anniversary since the tsunami, which was generated by an 8.1 magnitude earthquake which occurred 120 miles southwest of American Samoa, claimed 34 lives, destroyed multiple homes, businesses and properties, and caused millions of dollars’ worth of damage.

The first award was presented by the Lions Club of Pago Pago to Mr. Archie Soliai, Former President of the Club’s Pago Pago chapter.

“He was one of the very first people out on the field after the tsunami, providing help and assisting the people of our country, anyone who was in need at the time,” said Ms Tua-Tupuola.

In receiving his award, Mr Soliai highlighted that it is part of the Samoan culture to always help out those in need, and it was that part of him which naturally kicked in when the tsunami struck.

“I hope everyone who is here for the PRiMO conference can learn from our Samoan culture. We are a resilient people because we don’t wait around for someone or some agency to come in and help us. We first help each other and help ourselves,” Mr Soliai said.

Three awards were also presented by the American Samoa Department of Homeland Security in recognition of key people who were instrumental in the recovery efforts of American Samoa after the tsunami.

The final award was presented by the National Disaster Preparedness Training Center, in recognition of Galumalemana Ifopo Fuapopo Avegalio, whose efforts in training and educating the local community communities throughout many disasters since 1987, has helped build the resilience of the local communities in American Samoa.

The reception, organised by the Lions Club of Pago Pago, brought together the participants of the PRiMO Meeting to unwind after a productive day of deliberations, and presented the perfect opportunity for the awards and recognitions to be given out.

Formed in 2003, the PRiMO is the platform for bringing people and organisations together, channeling their efforts towards common goals to help communities become more resilient in the face of the many natural and man-made challenges experienced by the Pacific islands.  In all there are over 100 organisations that participate in these ongoing efforts.

Meeting every year, this year is the third PRiMO meeting hosted in American Samoa for which the meeting will seek feedback and input on pre-disaster recovery and long-term disaster recovery planning.

The special PRiMO awards event hosted by the Lions Club of Pago Pago took place on 24 September at the Tradewinds hotel. - Source: SPREP

For more information on PRiMO please visit https://coast.noaa.bov/primo/conference/ or https://primto2019.uhtasi.org/

The Pacific Risk Management `Ohana (PRiMO) Conference is being held from 24 – 26 September 2019 at the American Samoa Community College in Pago Pago in American Samoa.