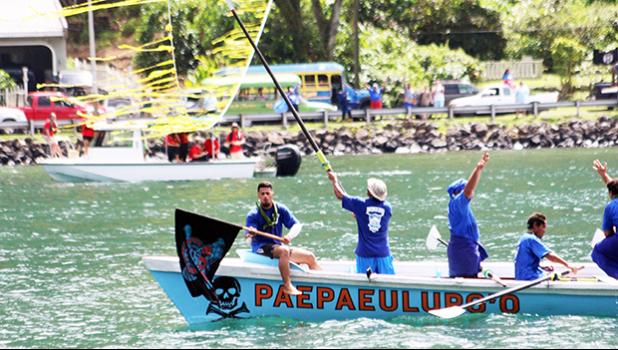 Some have dubbed this year's race as the 'worst' ever
By
Blue Chen-Fruean
blue@samoanews.com

And the east side couldn't be more excited. After years of placing in the Top 5 — consistently — Captain Leonard Liufau Sonoma has finally given Aua village what it never had: a fautasi championship title.

The results, which became 'official' after an announcement by Samoan Affairs Deputy Secretary Malemo Tausaga, are as follows:

The Aeto from Pago Pago, Matasaua of Manu'a, and the Fono a.k.a. God is Great — which was powered by teens and young men from the east side — did not compete. The first two took on water and the latter broke in half.

Luckily, nobody was hurt.

Samoa News was stationed at the finish line, as well as on the Uila ole Sami vessel, which towed the Aeto back to Pago Pago after the longboat was submerged.

Since Saturday afternoon, social media has been bombarded with comments about this year's Flag Day fautasi race. The bulk of the negative posts are towards the Flag Day Fautasi Committee.

Samoa News understands that prior to the race, local Captain Mike Pulu had mapped out the coordinates for the starting point via GPS. Samoa News sailed on board the Uila ole Sami — with Captain Pulu and Captain Rudy Su'a — to where the fautasi were supposed to be lined up, to find that the longboats were too far apart, and several boats had taken on water.

The first call for help was for the Manulele Tausala, a.k.a. Low Rider. Local businessman Genhall Manu'a Chen was on a jet ski, asking for pails to help scoop water out of the Nuuuli fautasi. Fortunately,  the captain and crew were able to address the situation and compete, eventually securing 2nd place.

The next call for assistance was for the Aeto from Pago Pago. When the Uila ole Sami arrived, the Aeto was submerged. Only the chest area and faces of some of the crew members were visible. Samoa News notes that a couple of DPS Marine Patrol vessels were out there, and neither was able to render aid.

Captain Mageo Patolo was able to keep his team calm and collected. A rope was tied to the Aeto and the Uila ole Sami dragged her to Pago Pago. The crew was in high spirits though, singing church hymns on the ride home. The tapua'iga was awesome. Aeto fans and supporters lined the area in front of ASCO Motors, cheering and screaming as the longboat made its way behind the TAOA compound.

En route to Pago Pago, the Uila ole Sami came across the Matasaua. It had been taking on water for about half an hour before we got there. At this point, half of the crew members were still on the longboat — with Captain Malaepule Fuega Moliga — while others were in the ocean, hanging on to the fautasi.

It was the Manu'atele that rendered assistance, throwing life jackets in the water for the stranded rowers.

During a meeting of fautasi captains following the race, Malaepule voiced his disappointment, saying it appears the Committee was more worried about the race, than the safety of the kids.

Towards the east, Samoa News saw what was left of the God is Great a.k.a. Fono fautasi. The longboat had broken and the half that was in the area had flipped over and was floating aimlessly in the water. Crew members — mostly young men from the east side — had been picked up by two boats owned by local businessman Peter Crispin.

While all of this was going on, the Flag Day Fautasi Race continued — unbeknownst to any of us who were still out near the starting point.

The weather was great. The skies were clear, there was a little breeze, and it wasn't too hot. However, the sea was rough. Much too rough for a fautasi race, according to marine experts who spoke to Samoa News before and after the race. The waves — and current — were strong enough to break one fautasi and flood two others.

The Star Princess cruise arrived that morning and it is assumed that the fautasi race was postponed to 11a.m. so the tourists could witness it. There is a consensus that had the race been carried out at its originally scheduled time of 8 a.m., the results would have been different — more favorable.

For a brief moment, fautasi fans were content, after word got around that the race had been postponed to Monday. But excitement turned to frustration, disappointment, and anger — for some — when the announcement was made that the results are official and there will be no Monday race.

The words were uttered during a meeting attended by fautasi captains following the race.

Fuao's Captain, Gaoteote Palaie Tofau said he will abide by the Committee's decision because although he noticed an unfair start, the gun did go off, signaling the start of the race.

Soliai Tuipine of Nuuuli, accused Aua Captain Leonard Liufau Sonoma of making it a habit to be in front of everyone when the gun goes off. He said this is something the Committee needs to address because it happens every year.

But according to Sonoma, his crew followed instructions and were at the starting line when the gun went off. Lemanu agreed, saying the race started only after the Committee confirmed that all the boats were evenly lined.

A decision on how much prize money each fautasi would receive, has been left up to the Committee, following a suggestion that each fautasi get the same amount, including the 3 that didn't compete.

Pago Pago chief Pulu Ae Ae Jr.  said the race should never have happened. "I am very saddened that the Committee didn't cancel the race," he said yesterday over a telephone interview with Samoa News.

Pulu said once the God is Great fautasi broke in half, the Committee should have realized that it was unsafe and much too dangerous to proceed, and everything should have been cancelled.

"God gave us eyes to see and when you see people scrambling in the ocean because the boat they were on broke in half, quick action should be taken. A decision should have been made right then and there to cancel the race and tend to those affected," he continued.

Pulu says it is necessary for the government to step away from conducting the annual Flag Day fautasi races and look for people from the outside to run it.

"There are too many complaints. The Committee is to blame. It was very poor decision-making on their part. This is not the time to campaign. Politics should not be involved in fautasi races," Pulu said, adding that the time and energy spent by each auva'a to train for the big race has all gone to waste.

He said the Aeto crew were in tears, frustrated that they couldn't compete. "This isn't right. All the fautasi teams should have a fair chance to race. They all deserve that opportunity because they've worked hard for it. Decisions should be based on love — for the rowers, the villages, supporters, and everyone involved."