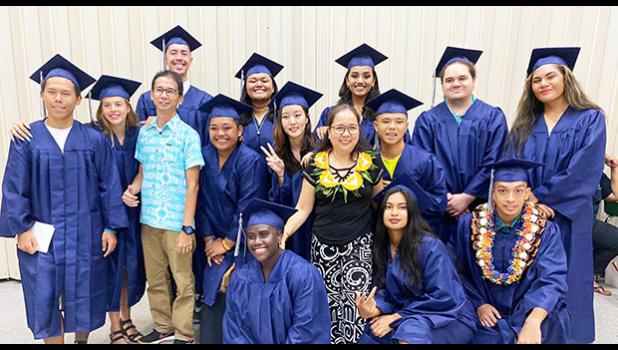 Pago Pago, AMERICAN SAMOA — Pacific Horizons High School’s Class of 2021 graduated 14 students from the Home of the Pacific Navigators on Saturday evening — beginning the annual cycle of the local graduation commencement ceremonies for high schools, both public and private — in American Samoa for 2021.  Pacific Horizon’s School is a private co-ed school located in Ottoville and is known for its interactive hands on approach to learning.

The graduating Pacific Navigators are going out into a world that has largely changed due to the COVID-19 pandemic, which at times has highlighted the differences between global communities more than their common strengths.

Class Valedictorian Leilani-Ena Olive Stanley-Galea’i, who started at Pacific Horizons School when she was 3 years old, said during her speech that she owes a great debt of gratitude to Pacific Horizons for helping to shape her into the person she is today, “as well as the person I have yet to become.”

She reflected on the diversity of the PH’s student body, enabling her to become a faithful navigator of life. “They are my people,” she stated.

“Of the many lessons I take from Pacific Horizons School, I am most grateful to have learned the value of living with an open mind, and equally open heart,” Ms Stanley-Galea’i said.

She extended love and thanks to her grandparents and parents, as well as her brother. “Thank you for raising me not to be a good student, but a good person,” she said of her parents.

Class Salutatorian Victor Chen in his remarks, noted he had been at Pacific Horizons for 15 years, and as a “Navigator” and in life has been inspired by the school’s teachers “to go the extra mile to help others.” Something he is “extremely grateful to have had … as my mentors both in class and in life.”

He offered a concept to his fellow graduates to reflect on when they come across a huge milestone in their lives, as he does. Mr. Chen said, “I like to compare life to swinging on ropes. Imagine hanging onto a rope, each rope ahead of you is a new stage in your life. To get to it, you’ve got to let go of your current rope, step out of your comfort zone, and reach for the next. We are continuously doing this as we move forward in our lives.”

He likened their current status as high school graduates to being in the “middle of our transition to the next rope.” Will we fall? It doesn’t matter Chen said, what matters is that “after every fall, you still get back onto that rope swing again. You keep moving forward.”

Chen, Victor (Salutatorian) — He was offered admission to the three US service academies, the US Air Force, US Navy and West Point. He has committed to serving in the U.S. Air Force and will attend the United States Air Force Academy this fall where he will major in engineering.

Corry, Micah — She will be going on full time on her mission with the LDS church.

Cox, Jade — She is planning to attend Waikato University next year and intends to study Environmental Engineering.

He-Lotu Finau, Ofa  — He plans to enlist and serve in the United States military.

Kolone , Fa’atiuoamoa Nui — She will be attending UH Manoa in the fall and will be majoring in Biology as a first step towards becoming a physician.

Lee, Grace — She will be attending Orange Coast College in the fall where she plans to major in Pre-Dentistry.

Lo, Kevin — He will be attending UC San Diego and will major in Engineering.

Sebastian, Liv Orange — She will be attending Miramar College this fall, where she will major in Pre-Nursing as a first step to becoming a registered nurse.

Stanley-Galea’i, Leilani-Ena Olive (Valedictorian) — She will be attending Duke University in the fall. She is the recipient of the Duke University Grant, which covers tuition, housing, and meals. She is considering a major in Pre-Law with a minor in Computer Science.

Stanley-Maluia, Michayla Naunuh — She will be attending UC Davis where she will be majoring in International Relations.

Takubala, Evis — She plans to attend UH Manoa and major in Pre-pharmacy.

Tofaeono, Luiama Talei Filemoni — She will be attending Briar Cliff University this fall. She is the recipient of the BCU Academic Achievement and Women’s Volleyball Scholarship covering tuition, housing, and meals.

Tolmie, Michael Evan — He is undecided on his next steps after graduation.

Tuato’o, Brandon — He will be attending Saint Martin’s University where he plans to major in Accounting. He is the recipient of the St. Martin’s Chancellor’s scholarship award which will cover more than half of his tuition costs.