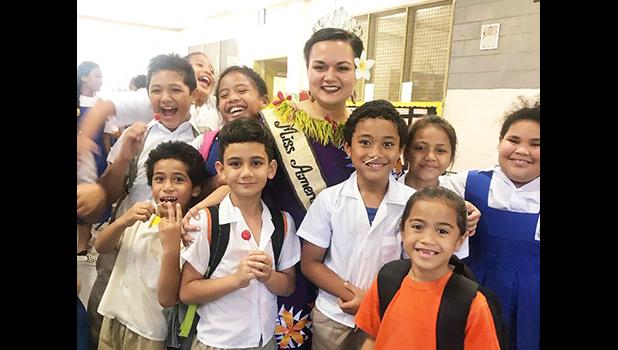 “On behalf of the school, staff, but most of all, the wonderful boys and girls of St. Theresa Elementary School, we would like to thank one of our very own — an alumnus — Miss American Samoa 2018-2019 Magalita Johnson, for being a humble and gracious Ambassador of Amerika Samoa,” said school principal Victor Langkilde. “St. Theresa is so proud of Magalita Johnson and would like to thank her for this last school visit before concluding her reign,” he continued.

Magalita’s appearance was in response to an invitation from the school — an opportunity for the student body to thank her for being “a wonderful ambassador for American Samoa and role model for the territory’s children.”

Magalita was accompanied by her mother Fia. Faletua Malia Pepe, who was principal of St. Theresa Elementary School during Magalita's childhood years there, was invited and also in attendance

“Such a proud moment for the school,” Langkilde said of the special visit.

Magalita will relinquish her crown this Friday, Sept. 27th when a new title holder is named at this year’s Miss American Samoa pageant set to be hosted at the ASCC Multi-Purpose Center.