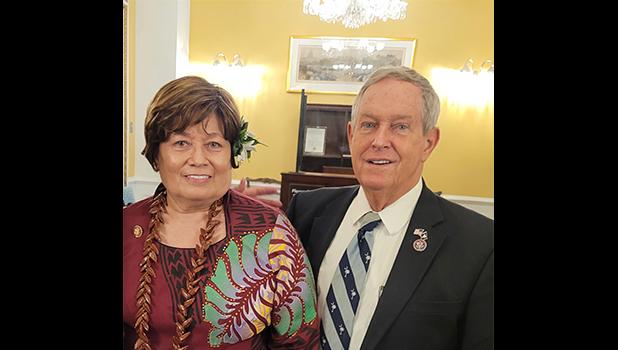 Washington, D.C. – Congresswoman Uifa’atali Amata welcomed House passage of the National Defense Authorization Act (NDAA) for Fiscal Year 2022. This major annual legislation authorizes Pentagon operations across the board, including priorities such as a 2.7 percent pay increase for our troops, and Pacific security measures, including $8.8 billion for the Pacific Deterrence Initiative, expressing U.S. commitment to a free and open Pacific region, codifying an Assistant Secretary of Defense for Indo-Pacific Security Affairs, and numerous provisions addressing strategic challenges related to the government of China. NDAA is among Congress’s most significant legislation, authorizing $768 billion, and upon final passage it will be the 60th straight year for the legislation to be successfully passed and signed into law.

Additionally, this year’s NDAA includes two amendments through Congresswoman Amata’s leadership – a small business Radewagen amendment which she sponsored; and another on which she was the lead cosponsor with Congresswoman Katie Porter (D-California).

The Porter-Radewagen amendment follows up on a recent study of the Runit Dome, as commissioned in a prior NDAA, to establish reports to declassify regarding nuclear waste measures in the Marshall Islands to ensure health and safety, and prevent ocean pollution. The Runit Dome houses nuclear waste material from 67 nuclear tests conducted in the Marshall Islands before 1958.

“I especially welcome this pay raise for our military, as so many of our own from American Samoa join our nation’s proud all-volunteer forces,” said Amata. “Legislation affecting our military or veterans is always important to American Samoa, and the NDAA strongly expresses U.S. commitment to the Pacific, including alliances and strategic priorities. Finally, our amendment takes another step in standing with our allies in the Marshall Islands, and I appreciate working with Congresswoman Porter on that priority for their health and preventing ocean pollution.”

The NDAA provides for all Department of Defense activities, including supporting our Armed Forces personnel; military construction and housing; weapons systems and modernization; equipment and training; health care for the military, including expanded mental health assistance at bases; cybersecurity provisions; research and development; national security programs in the Department of Energy; and much more available in a 26-page summary.

Additionally, the NDAA establishes a commission on the war in Afghanistan, expresses the sense of the Congress of the importance of honoring commitments to Afghanistan partners, and authorizes $500 million to continue efforts to assist and relocate at-risk Afghanis and those with U.S. Special Immigrant Visas.

The congresswoman also welcomed House passage of her amendment Thursday placing her small business bill, the Parity for HUBZone Appeals Act, H.R. 8229, within the larger National Defense Authorization Act (NDAA), H.R. 4350. The House passed her amendment as part of an en bloc amendment – a means of moving quickly on a group of legislative items known to have widespread support.

In June, Congresswoman Amata reintroduced the bill in collaboration with original cosponsors Rep. Chrissy Houlahan (D-Pennsylvania) and Rep. Pete Stauber (R-Minnesota). Last year, the bill also attracted strong bipartisan support and was passed by the full House of Representatives, but not by the Senate at the conclusion of the 116th Congress.

Effectively, all of American Samoa is a HUBZone-qualified area under those requirements. This reform would increase objectivity and transparency for small businesses upon appeal.

“The HUBZone program aims at a more level playing field for small businesses in economically challenged or geographically remote areas, which includes American Samoa,” said Congresswoman Amata. “This amendment will reform small business appeals to be assured they are transparent and even-handed. I’ve appreciated working with Congresswoman Houlahan and Congressman Stauber for some time on this effort to ensure fairness.”

This reform eliminates any conflict or appearance of conflict by removing oversight of the appeals from the same entity that issues the HUBZone certifications. Currently, a final appeal of a HUBZone business’s status goes to the Office of Government Contracting & Business Development (GCBD), which also oversees the office that signs off on the certifications. The amendment moves appeals to OHA, which already hears such status protests or appeals for other SBA contracting programs.

OHA is a separate body from the offices that issue certifications, making it a more appropriate, objective venue; allowing both the SBA and taxpayers to have all appeals heard under one roof; offering more transparency; and providing searchable publication of OHA decisions online for a clear record.