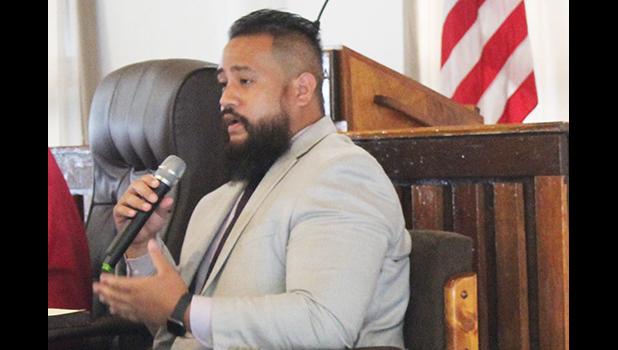 Pago Pago, AMERICAN SAMOA — The Senate Retirement Committee plans to make necessary changes to an administration bill which, among other things, hikes the contribution rate for employees to the Retirement Fund over a three year period, starting next year, according to committee chairman Sen. Tuaolo Manaia Fruean, who said the Senate is not going to rush into making a final decision on the legislation, which was introduced in the Fono late last month.

Speaking at the conclusion of yesterday’s committee hearing, Tuaolo said the committee is looking to adopt the ASG Employees' Retirement Fund Board of Trustee's recommendation to increase the contribution rate from 3% to 6% for the employee and 8% up to 11% for ASG.

There are three major amendments outlined in the bill, which was the subject of yesterday’s hearing, where Retirement Office executive director I’aulualo Fa’afetai Talia, board chairman, Va’anatiu T. Iafeta and the governor’s assistant legal counsel Alema Leota testified.

The committee’s first hearing on the bill was held early last week and was continued to yesterday as senators wanted to question Leota, who reportedly drafted the measure for submission to the Fono.

Leota confirmed that he was the “technical drafter” of the measure, and he met January this year with Iaulualo at the direction of the governor and prior to the Fund’s meeting held in Honolulu in February to discuss provisions to be included in the draft proposal.

In meeting with Iaulualo, Leota said he explained the proposed provisions — outlined in the bill: increase employee contribution; capping at $85,000 the maximum salary used in calculations to determine retirement payments; and funding allocation from the American Samoa TeleCommunications Authority to the Fund.

He told the committee more than once that he was not made aware of any changes that came out of the Honolulu meeting, regarding the contribution, before the bill was submitted to the Fono.

Iaulualo confirmed the meeting with Leota as part of preparing and drafting the bill, but the specifics on the distribution of the contribution increase was not discussed, saying that is up to the governor and the Fono.

Iaulualo said it was mentioned during the meeting with Leota of the governor's wish for the Fund to get some portion of profits that ASTCA gets from the Hawaiki cable.

As for the $85,000 cap, he said there was a lot of research and review that needed to be carried out and the board had discussed the issue, and discussions — and research — are ongoing.

According to Iaulualo, there are a lot of issues to look at. For example, if the employee is making $100,000 a year — should the deduction for the contribution to the Fund continue to be based on the person’s salary or using the $85,000 salary level?

Tuaolo, who is the Senate’s representative on the Retirement board, asked what the board’s recommendation is for the contribution hike and Va’anatiu said 3% for the employee and 2% for ASG.

The employee shouldering the heavy burden of the proposed increase was mentioned by several senators including Sen. Magalei Logovi’i who argued — at least three times — that the bill is “putting the whole burden on the employee [and] it’s not fair.”

“The government should also carry a burden” of the increase, he said, adding that come 2020, the employee will pay 7.5% in addition to the 2% wage tax.

For further understanding of the committee, Tuaolo cited an example of how much the employee (making $10,000 annually) will take home every two weeks — come 2020 — after paying the 7.5%, the 2% wage tax, and 4% local minimum tax.

The employee takes home about $303 every two weeks — but that doesn’t include other expenses such as electricity and other obligations — like those to the church, he said.

The bill would also create a new section under current law, titled: “American Samoa TeleCommunications Authority (ASTCA) budget requirements and appropriation of profits”.  It allocates 100% of ASTCA’s profits for specific use.

Sen. Fai’ivae Iuli Godinet, a former ASTCA board chairman, said from his "point of view,” distribution of ASTCA profits including those that would go to the Fund, is “not enough to operate ASTCA.”

Fai’ivae questioned whether it's a conflict of interest for Leota to be the “technical drafter” for the bill, when Leota is also an ASTCA board member.

Leota said he drafted the bill in January before he was appointed by the governor to the ASTCA board.

Tuaolo noted during the hearing that the current legislative session officially ends this Friday, and the committee plans to make changes to the bill, which will then be taken up when the Fono convenes in July for the 2nd Regular Session of the 36th Legislature.