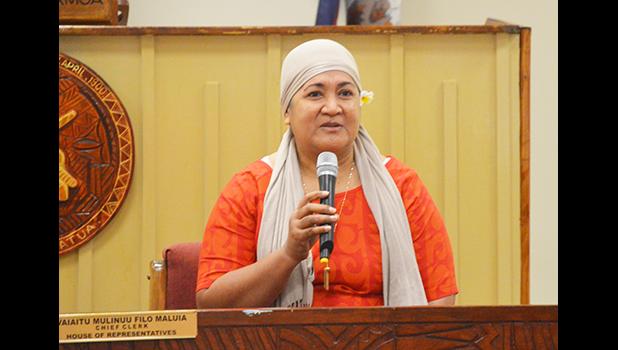 Faipule questions if her health is fit for her to carry on the duties of the office
By
Ausage Fausia
ausage@samoanews.com

Pago Pago, AMERICAN SAMOA — Dr. Salote Aoelua-Fanene was confirmed by the House of Representatives last week by unanimous vote as Director of Youth and Women’s Affairs. The late confirmation for the DYWA Director was due to her being off island for medical treatment.

When asked by Rep. Lavea Fatulegaee Mauga, who chaired the hearing, about her health and whether she was fit to carry out her duty as a member of the cabinet, Aoelua-Fanene said she was well and prepared to fulfill her leadership duty.

Lavea told the witness that the reason he asked this question was because if something happens to her while she’s on her job, the government would be liable.

Vice Speaker Fetu Fetui interrupted Lavea and said there was no need to ask her any questions, her testimony at her department’s budget hearing gave faipule an opportunity to hear her plans. He moved to excuse the nominee.

Rep. Vailiuama Steve Leasiolagi in support of Aoelua-Fanene acknowledged her service and her willingness to take up the post, and pointed out that the House of Representatives must give her their 100% support instead of asking questions that discourage her.

In his letter to Fono leaders on Aug.6, 2021, Gov. Lemanu P. Sialega Mauga said that Aoelua-Fanene has returned from her emergency medical leave and is eager to serve the people of American Samoa. Her background and experience as detailed in her resume making her a qualified candidate to oversee and manage the Department of Youth and Women’s Affairs