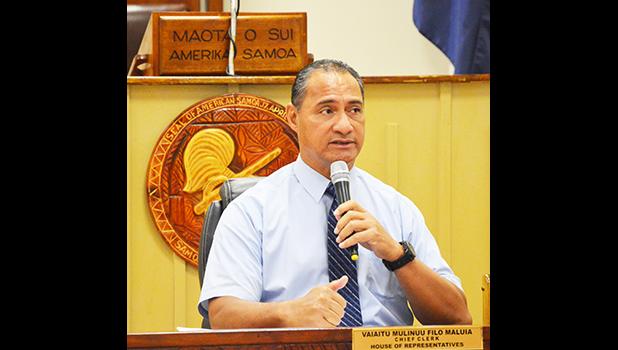 The decision by faipule was made after the Director of the Department of Marine and Wildlife Resources (DMWR), Taotasi Archie Soliai testified before the House Agriculture Committee yesterday morning regarding this issue.

In his statement to the committee, Taotasi said that in 2014, NOAA designated 18 coral reef species from the region for Indo-Pacific (including Indian Ocean and Western Pacific) as threaten under the Endangered Species Act (ESA)-listed.

The seven Indo- Pacific corals listed as threatened under the ESA within U.S. waters in Guam, the Commonwealth of the Northern Mariana Islands (CNMI), American Samoa, and the Pacific Remote Island Area (PRIA), according to NMFS.

He said that the move by NMFS is redundant with local territorial regulations because there are already existing local regulations prohibiting coral take, as well as other regulations under the marine protected area programs, EPA water quality standards, and local permitting and review system of proposed coastal development.

In his May 26th, 2021 letter to the NMFS, Taotasi stated that if NMFS insists on proceeding with the designation, “we would like to request that NMFS consider refining the coral critical habitat areas using the distribution date of these ESA-listed corals based on these datasets collected by local experts: (1) one dataset was based on 74 roving dive reef slope surveys in Tutuila, Aunu’u, Ofu, Olosega, Ta’u, Rose Atoll and Swains; (2) belt transect data consisting of 500 surveys in 30-reef sites Tutuila island since 2005; (3) a dataset of 370 surveys in north Tutuila; and (4) coral species sighting; (5) reef flat surveys”.

A joint letter from the Gov. Lemanu Peleti S. Mauga, the Commonwealth of Northern Marianas and Guam in January had requested an extension. As a result, according to Taotasi, the comment period, scheduled to end on January 21st, 2021 was extended to Feb.15th.

The governors argued that designation has the potential to impact a wide range of activities necessary to maintain our island economies and infrastructure. Additionally, their respective governments were not consulted in advance of the proposed rule.

In his May 26th letter to the NMFS, Lemanu stated that the proposed designation covers a lager area of coral reef habitat and does not reflect the critical habitat of the threatened corals. Additionally, the proposed designation was developed without consultation with relevant local agencies using better and current locally-driven sources of scientific data.

“This is, yet another, example of proposed federal policies that have not gone through proper vetting, consolation, and input from local stakeholders,” Lemanu said in his letter to Pau Doremus, Acting Assistant Administrator for NOAA Fisheries.

Lemanu said that the biggest threat to American Samoa coral reefs is global climate change and our coral reefs constitute less than 1% of the geographical range of these ESA-listed corals.

“The threats to these ESA-listed corals are beyond our local jurisdiction and designation of large areas of our coral reefs as critical habitat will not protect these corals. We need to address global climate change and habitat destruction as threats to these listed at more appropriate levels,” Lemanu said.

According to the House Resolution, coral reefs are ecosystems with high coral and fish species diversity and this species’ diversity has supported local fishing communities for thousands of years.

For many years, coral reefs have sustained our local island communities through livelihood, subsistence and fish for customary exchange and cultural activities, and that fishing is integral to faasamoa.

The house also stated that coral reefs face various threat such as climate change, hand-based source of pollution, and exploitation and as such they need protection. A regulatory protection for corals currently includes a multitude of local and federal regulatory program that protect both Endangered Species Act (ESA)-listed species and coral reef habitat.

In order to avoid implementing additional and redundant regulatory programs on our ESA protected coral species, critical habitat maps must be based on the best scientific information available which includes the results of the coral 5-Year Status Review and local consultations with the DMWR.

The resolution also reminded that there are existing local and federal regulations prohibiting coral take and protections of coral reef habitat, as well as other regulations under the marine protected area program, AS-EPA water quality standards, and local/federal permitting and review system of proposed coastal development.

According to the house resolution, critical habitat maps presented in the Proposed Rule are not based on best scientific  information available as the coral 5-Year Status Review has not been completed.