Horrific stories continue to pour in about the Agriculture vet clinic 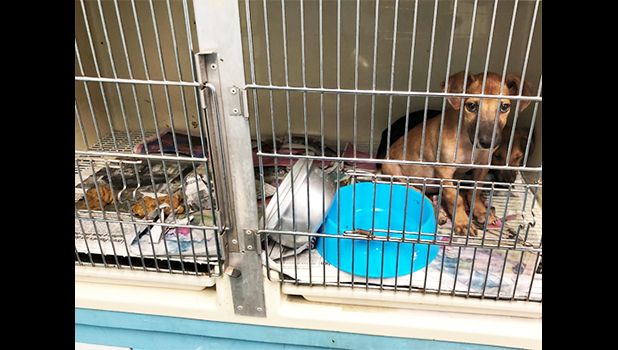 Pago Pago, AMERICAN SAMOA — As of last week, there was still no medication at the ASG Department of Agriculture Veterinary Clinic. And if that isn’t enough — a notice has been posted, informing all pet owners that as of Oct. 10th, the vet clinic no longer accepts any small pets (i.e. cats and dogs).

That means the only animals being serviced now are pigs, horses, and cattle.

The never ending complaints from pet owners center around the fact that there are no de-wormers, no flea and tick medicine, no vaccinations, no antibiotics, and pets cannot be euthanized. Surgeries that have been performed have ended up bad, as was the case of a dog that reportedly was taken in three weeks ago to remove one eye and woke up from the procedure, blind.

A pet owner who spoke to Samoa News earlier this month said she moved here 15 years ago and had been taking her dog in to the Vet Clinic consistently, using the pick up/drop off service that was provided for $10.

She said she has been told that the pick up/drop off service is no longer available, because the vet clinic vehicle is being used by the Dept. of Agriculture. “There has been a profound lack of support by the Department of Agriculture director and to add insult to injury, the clinic is being run by a woefully unqualified person,” she said.

The pet owner said her dog is ‘old’ and she is ‘deeply concerned’ for her health, and the well being of other small animals. “So what about the canines used by Customs and DPS? What about them? Isn’t it a requirement to have a licensed vet look after those dogs?” she asked. “What actions are being taken to address this problem?”

Samoa News attempted more than a handful of times last Friday to contact the vet clinic for a comment. Efforts were unsuccessful as of press time, as nobody answered the phone.

Samoa News then reached out to Mona King, co-founder of the nonprofit organization, Alofa Mo Meaola, who revealed that earlier this year, Governor Lolo Matalasi Moliga had approached them about possibly taking over the vet clinic. She said she sent a proposal and was later told that the governor did not want to privatize the vet clinic — he couldn’t see putting it under anyone else but the DOA.

King and a group of local animal lovers are not giving up. They have taken their concerns to the Chairman of the House Committee on Agriculture, Rep. Alex Jennings, and together, they are trying to find a way to come to some sort of agreement, perhaps even transferring the vet clinic under the umbrella of another agency, away from DOA.

King pointed out that because Lameta is not licensed — locally or in the U.S. — he is  not qualified to order or handle controlled drugs.

When Samoa News first spoke to DOA director Filifaatali earlier this year about Lameta’s credentials, and how he is not able to procure medication for the animals, Filifaatali said Lameta can order medicine from outside the U.S., particularly Australia and New Zealand.

But King says that’s not true. According to her, medication orders require a U.S. Drug Enforcement Agency (DEA) licensed vet, something Lameta is not.

According to a slideshow prepared by the Alofa Mo Meaola group, since April 2019, Lameta has conducted an estimated 10 surgeries on dogs and cats, of which 9 died immediately afterwards. More than 30 animals have died after being taken in to see Lameta, according to the slideshow.

Over 40 complaints have been lodged by animal lovers who claim that their pets have been misdiagnosed, overdosed, and even been given the wrong medication by the new ‘vet’. “It’s a sad situation,” said King on Friday, adding that she has reached out to some people for help,but it will be hard because they have no clinic to work out of.

There are however, two possible locations King says they would like to open, to use as a site to work with volunteer veterinarians. But they need donations to make it happen.

(Alofamomeaola@gmail.com is the PayPal donation email)

Samoa News understands that while community members donate cleaning and basic supplies to the vet clinic, reports have been filed about the unbearable stench and deplorable health conditions there.

In addition to not being able to order or handle drugs used for surgery, Lameta also does not hold a USDA license to clear animals for travel from American Samoa to the U.S., according to the Alofa Mo Meaola slideshow, which also featured a photo of a dog that was taken to the Vet Clinic on July 18th for a leg wound but died 8 days later, his injury festering in maggots.

For now, one of the concerns is how fast the animals are reproducing. With no spay/neuter clinics, dogs and cats are being dumped on the roadside, at people’s doorsteps, and behind public buildings. These strays end up becoming a threat to public health. Stray dogs could also become a danger to the community — as they search for food, roaming in packs.