He is not a spy or drug dealer 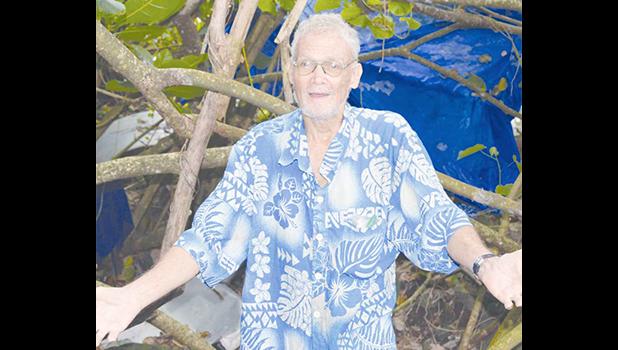 Community members and even lawmakers are assuming that William Reader, a homeless man who lives out of a tent on the side of the main road in Nuuuli, is a spy or a drug dealer.

Samoa News was able to interview Reader yesterday morning, to obtain his side of the story.

“I just want to let the people of American Samoa know that I am not a spy, nor a drug dealer of any kind,” Reader said. “I consider myself a homeless man, living under this tent trying to follow Jesus’ footsteps when He was living in the wil­derness and fasting for 40 days and 40 nights without food or drink.”

Reader said he wants to clear the air and tell the community his side of the story.

“I don’t want anybody to think that I am doing anything illegal here in the territory. I am just a normal person like you. I’m poor and don’t have a house to stay in; and the reason why I’m here in American Samoa is for my safety, and also to ful ll our Lord Jesus Christ’s mes- sage to the world, that we need to read the Bible and spread His Word to others.”

A U.S citizen, Reader told Samoa News that his safety was the main reason why he came to the territory, and he felt he had to relocate after reading a book about what the Al-Qaeda organization plans to do to the United States, if they attack Iran in the future.

“I read a book called  Al-Qaeda’s Connections by Paul Williams, a professor from Pennsylvania University; and inside that book, it’ s stated that the Al-Qaeda, a terrorist organization, has already hidden bombs and nuclear weapons inside major cities of the United States, and they’re threatening the United States that if they or Israel attack Iran, they will blow up their 20 major cities on the same day.”

Reader’s choice to set up a tent next to the Nuuuli main road has raised suspicions from several community members, and even some faipule, accusing the palagi man of being either a spy or a drug dealer.

During a hearing in the House chamber to discuss ways to control and stop illegal drugs from entering the territory, Vice Speaker Rep. Fetui Fetu Jr. referred to Reader, saying the Department of Public Safety needs to check his background, to determine who he is and what he’s doing here.

“We are leaders of our country and we need to do everything in our power to protect our land, our people, especially our children,” said Fetui.

The Manu’a lawmaker said he believes the homeless man has solid connections to outsiders who are entering the territory via boats or yachts.

“Who knows if these people are bringing in illegal drugs to our shores? I have a feeling that they deliver it to this home- less man to distribute to our people, to sell, and it affects our children,” said Fetui, who added that homelessness does not exist in American Samoa, because everyone has families and homes, and for someone to be homeless in our society is something that our people nd hard to accept.

“It’s not a good thing for our people, especially tourists, to see tents on the side of the road when they pass by everyday, so our government needs to take action on this matter because prevention is better than cure,” Fetui concluded.

When Samoa News asked Reader if he is engaging in any illegal activities on island that would make people suspicious about him, he smiled and said, “I’m not doing anything illegal here. Again, I am not a spy, and it’s a silly joke if people think that I am, because only a person who is in government and observing what is happening in the military can be a spy, to send information to the Russians or Germans, or who- ever. I’m not connected to any kind of organizations outside of American Samoa.”

When asked if he was sending any information about American Samoa to other countries, people, or organizations, Reader said “no” and added that he only sends emails to his friends and families in the US, including his brother and two sisters who are living with their families in Florida.

When Reader first arrived in the territory over a decade ago, he lived in Vaitogi.

After a few months, he moved in with a family in Nu’uuli for 3 years, before he bought a pick-up truck that he used to transport his belongings around the island.

“I traveled from village to village to try and educate myself about the island’s culture and how people live their lives; and that’s where I met some friends,” he said. “I’ve been living in my tent in Nu’uuli for the last 4 years, after the land- owner gave me permission.”

Last year, according to Reader, some government officials instructed him to leave the area where his tents are, because he does not have access to a bathroom.

“I told these government officials that I don’ t really need a restroom because I don’t eat heavy food too much. I only eat herbs and drink water.”

Reader said when he needs to use the restroom, he either goes to the Feleti Barstow Public Library in Utulei or the ASCC during working hours.

Reader, who describes himself as a “joyful immortal” lives pretty much a normal routine like everyone else. Every weekday he goes to the ASCC Library and uses the computers there to send emails to his family and to study the stock market. He loves reading the Holy Bible, which he says teaches him how to live like Jesus.