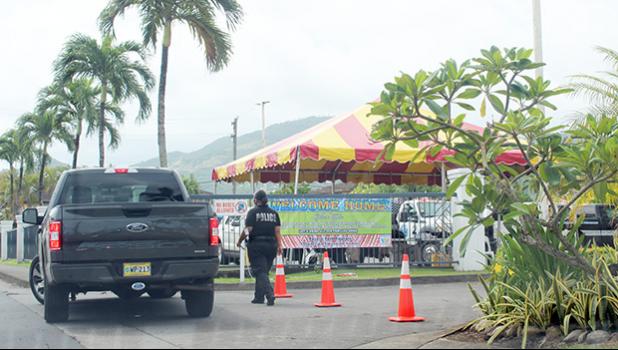 Pago Pago, AMERICAN SAMOA — As television news footage out of Honolulu on the morning of Feb. 1st showed some American Samoa residents at the Honolulu airport heading for check-in for the first repatriation flight to the territory, Gov. Lemanu Peleti Palepoi Sialega Mauga posted a message on the ASG official Facebook page for the first group of returning residents stranded in the US since the travel ban was imposed last March due to the COVID-19 pandemic.

"I applaud you all for persevering and being patient thus far; from the time spent at the White Sands Hotel en-route to Tradewinds, we ask that you continue your patience,” the governor's message read.

“We are all anticipating your safe travels and are looking forward to the end of your Long Journey Home,” he added.

The news report — broadcast on Hawaii News Now and aired in American Samoa on Moana TV Ch: 8 — was also watched by many in the territory, and streamed on HNN’s social media platforms and linked on the Samoa News social media sites.

All 159 passengers on the first repatriation flight were immediately transported to Tradewinds Hotel, for processing, and were administered their first COVID-19 test in the territory;  and then began the 14-day quarantine period.

Also on Feb. 1st, Monday, the governor issued a new directive, designating the Emergency Operations Center (EOC) and the local Homeland Security Department (ASDHS) as the “focal point” of coordination for the ASG Coronavirus Task Force, unless specified by the task force chair.

“In order to streamline coordination” for the task force, the governor directed that “all requests regarding Repatriation efforts and other Public Health Emergency matters must be processed” through the EOC and ASDHS, “unless otherwise specified” by the task force chair — Lt. Gov. Talauega Eleasalo Va’alele Ale.

According to the governor, ASDHS and EOC will support the Incident Command System (ICS) with the guidance of the Health Department. Further, EOC will complete the Organizational Chart, Incident Action Plan, Communication Plan and other requirements to accomplish the goals, objectives and priorities of the COVID-19 task force.

(Samoa News points out that the EOC is housed at the ASDHS building in Tafuna).

Lemanu, in a Jan. 3, 2021 memorandum reconstituted the task force and appointed new members, taking over from the previous task force.