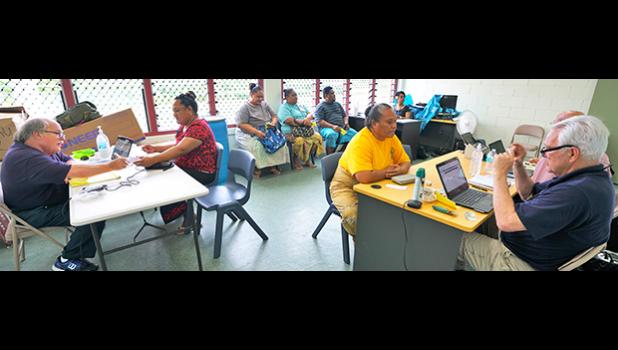 Without street signs or property addresses, FEMA needed a way to link survivors with their damaged homes, and a way to direct contracted inspectors to properties to do damage assessments.

“We put our heads together to develop strategies to resolve the problems so federal assistance could flow quickly,” said Benigo “Bern” Ruiz, federal coordinating officer.

There may have been long days and late evenings in the beginning, but the hard work and collaboration yielded a process that flowed smoothly. The effects have not gone unnoticed.

“I told President Trump the level of coordination and cooperation was amazing,” said Congresswoman Aumua Amata, “The work was seamless with awesome coordination.”

American Samoan officials, from the villages to the governor, prepared for the storm’s landfall and responded to initial life-saving issues. FEMA had an advance team in Honolulu pre-staged with the third stage of staff bringing in supplies on board a C-17 military aircraft.

“From day one, FEMA started working with us and we continued working together,” said Samana Semo Ve’ave’a, territory coordinating officer.

Cooperation is always key in response to any threat. Ve’ave’a said. The ASG along with pulenu’u, or village mayors, high chiefs, chiefs, and village police showed a unified front to deal with the consequences of the storm. The cooperation carried over into recovery.

“All directors were in one room in the Emergency Operations Center to respond to the needs of the people,” he said.

Amata explained that the American Samoan people are already organized from a cultural standpoint. She said Samoans are “kind, giving and have a built-in humility. The crux of the culture is respect; be thankful.”

“We learned lessons for the next one, which we hope does not happen,” said Ve’ave’a.

(Note: This is the second of a three-part series that describes the impact of Tropical Storm Gita on a secluded tropical island 6,000 miles from FEMA headquarters and below the equator. The series shows how the American Samoa government and the federal government cooperated to meet the needs of the survivors.)