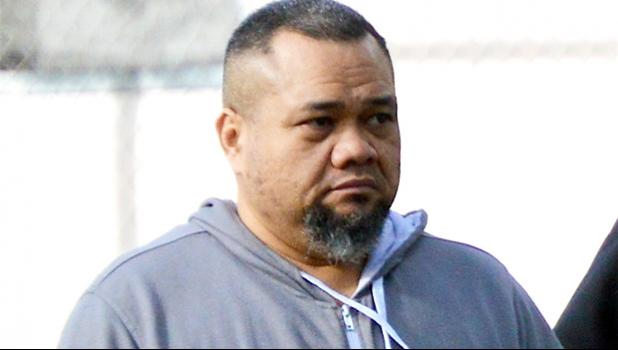 Pago Pago, AMERICAN SAMOA — Former DPS police officer Steven Tuato’o who eluded local authorities since last November and ducked out on answering the allegations against him is now in custody.

Tuato’o, 43, was extradited from Washington state on Tuesday night and made his initial appearance in District Court this past Wednesday morning, where Judge Fiti Sunia ordered a 'no bail' status.

Tuato'o reappeared in court yesterday for his preliminary examination (PX) hearing, and his next court date is set for Aug. 10 at 10:30 a.m.

The charges stem from an incident late last year when detectives of the DPS Vice & Narcotics Unit arrested three men during a string of raids in Taputimu, Alofau and on the main road.

At the time, Tuato’o was arrested by police at his home in Alofau. The other two men arrested were Cody Wood and Taisia Lemalie.

All three men were taken into custody and held for 48 hours to await the filing of criminal charges against them.

However, Tuato'o was released from the Territorial Correctional Facility (TCF) after the 48-hour holding period expired, and according to reliable sources, he immediately left the territory.

The government claims that it was May of last year when a confidential informant (CI) informed detectives of the Vice & Narcotics Unit that a male by the name of Steven Tuato’o from Alofau is involved in the alleged distribution of marijuana and methamphetamine along with a male by the name of Cody Wood from Tapitumu, and a taxi driver named Taisia Lemalie. (The three men who were arrested during the November raids).

The CI told police that Tuato’o was allegedly involved in the drug trade since 2015 while he was still a police officer. It was during the beginning of 2017 when the CI witnessed Tuatoo allegedly smoking meth with some people at a party. Later that evening, the CI saw Tuatoo driving to Taputimu to the Wood residence to get some more ice (meth).

In June 2017, the CI again provided information to police about Tuato’o allegedly smoking ice with a drug dealer in Alofau. The CI informed police that sometimes, Tuato’o allegedly uses a taxi driven by a man named DICE to deliver his meth to people who cannot come to him to buy meth. DICE is Taisia Lemalie's alias.

In Aug. 2017, the CI again informed police that Tuato’o was allegedly selling ice he got from Wood in Taputimu. The CI witnessed Tuato’o at Wood’s residence in Taputimu getting his reload (new load of meth for sale).

After picking up the supply, Tuato’o would allegedly package the meth in small cut up straws and allegedly sell them on the east side. The CI also witnessed Tuato’o’s son allegedly making the exchange with a person who came in a vehicle to buy ice. The CI further stated to police that every time Tuato’o is dry (no meth), Wood is the main source to reload the drugs to sell and use.

After receiving all the allegations regarding Tuato’o's involvement in the drug trade,  police officers set up a controlled buy using the CI to purchase drugs from Tuato’o. The operation was witnessed by several detectives of the Vice & Narcotics Unit.

The CI used $50 provided by the detectives to buy meth from Tuato’o at his Alofau home.

The white substance that was bought by the CI from Tuato’o was tested and turned positive for meth.

On Nov. 03 2017, a search warrant was requested through the Attorney General’s Office and issued by the District Court on the same date.

On Nov. 09, 2017 around 6:00a.m, detectives of the Vice & Narcotics Unit along with several police officers executed the search warrant for all three defendants in this case.

The search included not only Tuato’o’s residence in Alofau, but also his parent’s home located behind Alofau Elementary School.

Police searched Tuato’o’s bedroom and discovered a small black bag with $151 inside, along with a clear glass pipe with what appeared to be crystalline residue. Also discovered was an earphone pouch that held what appeared to be 10 rolled marijuana cigarettes and two small baggies of a green leafy substance (marijuana).

Officers also discovered in a storage room located inside Tuato’o’s home two rolled marijuana cigarette joints and paraphernalia. A 12 gauge shotgun was discovered inside a bedroom occupied by one of Tuato’o’s children. In the kitchen area, police discovered a foil pipe containing a green leafy substance, along with various straws.

Tuato’o’s vehicle was also searched. In there, police discovered an empty white straw with cut ends below the middle compartment of the vehicle.

No drugs were found when police searched Tuato’o’s parents home but several straws were found inside a red purse inside one of the rooms.

After being read his constitutional rights, Tuato’o refused to write a statement about what was discovered. He told the investigating officer that he was just a user, not a seller. He claims he has a panic attack disorder and depression, and he sometimes smokes meth to cope.

A second affidavit was filed by the government regarding Tuato’o’s case.

In the second affidavit, the government states that Tuato’o was arrested on Nov. 09, 2017 after illegal drugs along with drugs paraphernalia were allegedly discovered at his residence in Alofau.

He was booked at the Territorial Correctional Facility (TCF) last November and was set to appear in court but due to the Veteran’s Day Holiday, the next sitting of the court wasn't until Monday, Nov. 13, 2017.

Between Nov. 11-12, 2017, Corrections Officers at the TCF improperly released the defendant from custody after the expiration of the 48-hour confinement period.

The affidavit to support the charges against Tuato’o was filed in District Court on the morning of Nov. 13, 2017; however, the defendant could not be located and therefore was not arrested.

A movement profile provided by the Attorney General’s Office indicated that the defendant flew to Apia on Sunday, Nov. 12, 2017. Furthermore, information provided by Federal ATF agent Brent Price to DPS indicates that the defendant re-entered the United States through Los Angeles, California via airplane on Nov. 15, 2017.

In May of this year Tuato’o’s whereabouts was confirmed by the King County Attorney General’s Office to Samoa News via-email — Tuato’o was arrested in Washington State, and charged with one count of Domestic Violence Felony Violation of a Court Order.

He was found guilty in July, and under a plea agreement with the government on June 13 of this year, Tuato’o pled guilty to Domestic Violence Misdemeanor Violation of a Court Order. He appeared before the King County Court on July 6, 2018 for sentencing.

According to the King County spokesperson, Tuato’o had been remanded to the Regional Justice Center without bail, to await extradition proceedings.