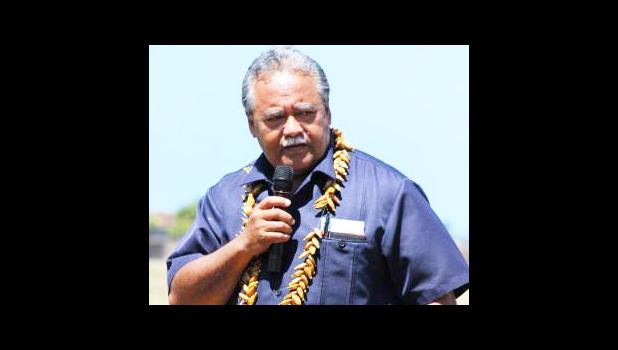 Pago Pago, AMERICAN SAMOA — The Governor’s Chief of Staff has pled no contest to third degree assault, a class C misdemeanor, punishable by 15 days imprisonment and a fine of $300.

Fiu John Saelua is scheduled to appear in court on Dec. 7, 2018 for sentencing.

Saelua appeared in District Court yesterday morning for his pretrial conference. He is represented by private attorney Marcellus T. Uiagalelei, while prosecuting the case is private attorney David Vargas, who was appointed by the court as Independent Prosecutor (IP).

When Saelua’s case was called, Vargas informed the court that they have reached an agreement with the defense. He added that the plea agreement is filed under seal, because there is additional information regarding other cases that are included.

Vargas did not elaborate on the additional information, neither did he mention what other cases he was referring to.

Judge Fiti Sunia informed Vargas that he needs to file the plea agreement in court because the court wants to see it.

Sunia then called for a brief recess, during which Saelua was served by the government’s lead investigator inside the courtroom with a copy of the amended complaint from the government, which contained terms of the plea agreement.

When court reconvened, Judge Sunia acknowledged receiving a copy of the amended complaint filed in court.

Uiagalelei said they too have received a copy of the amended complaint, and his client is ready to enter a plea according to terms of their agreement with the government.

When Sunia asked Saelua for his plea to the charge of third degree assault, the defendant responded in a loud voice, “I plead no contest, Your Honor”.

Sunia accepted Saelua’s 'no contest' plea. He then ordered a Pre-Sentence Report (PSR) and scheduled sentencing for Dec. 7th.

The allegations of sexual misconduct against Saelua first came to light back in 2016 when a case was filed against him by one of his family members, a woman who had been living with his family since birth.

The woman and her husband were said to be rounded up by Immigration agents in an apparent attempt to send them back to Samoa on the Lady Naomi.

An immigration officer processing passengers that day, upon learning that the woman was born here, and therefore could not be deported, contacted victims advocate Ipu Lefiti, and the couple’s forced departure was prevented.

The case continued to be under investigation by the Department of Public Safety for several months and many in the community were asking if the case would ever make it out of DPS.

Then last year, the High Court appointed Vargas as the Independent Prosecutor to handle the possible criminal case against Fiu.

In the middle of last year, Samoa News spoke to the Attorney General regarding the criminal cases against Fiu and House Speaker, Savali Talavou Ale.

At that time AG Talauega Eleasalo Ale confirmed to Samoa News that his office had received the case against Chief of Staff Fiu as well as that of House Speaker Savali Talavou Ale.

Flu’s initial appearance on Monday is the first time since last year that Fiu’s case has once again come into public view, while the Speaker’s case, which pertains to a vehicle imported under his name, in which alleged ammunition and drugs, marijuana, were found, is still unknown, with no indication if the case has been dismissed or is pending.

Last month, Samoa News was able to interview the alleged victim in this case, a 33-year-old mother of two.

During the one-on-one interview with Samoa News, the victim stated that the alleged verbal sexual abuse by Saelua, whom she considered her “father”, started in mid 2014 inside his own house and continued for two years.

“It was in 2016 during the election campaign when an incident happened in a public area, when this man touched me in a sexual manner. I wasn’t aware that my husband saw the incident until he asked me one night if I am having an affair with Fiu,” the woman alleged.

One of the things the woman wanted to know, was who signed the order to forcibly deport her and her husband in 2016, and why that person wanted them deported.

She also told Samoa News during the interview that she was not contacted by Vargas re the case and had no idea the case was now before the court, until she read about it in Samoa News.