Federal disaster assistance same from Texas to Am Samoa 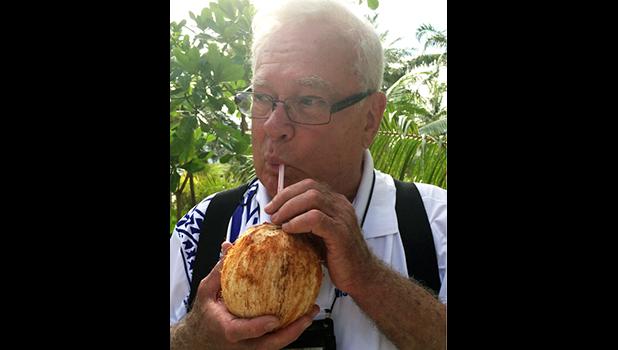 MANU’A ISLANDS, American Samoa — What a pleasant surprise for a country boy from Texas to step into this island paradise. It hurt to see so many homes damaged and property destroyed but the people we saw seemed happy. Where were the ones who had lost so much?

FEMA came to help. With excellent guidance from the American Samoa Government, we worked out a few kinks in our programs to fit into their culture. We started registering people at the Disaster Recovery Center in Pago Pago to match them with the federal programs. An advance crew went to the three islands of Manu’a, also hit by Tropical Storm Gia, to check on their damage. Other staff followed.

Our visual imaging team of four, FEMA and SBA, got a shuttle for a quick ride from Ottoville to the airport. There we crammed our gear onto a small plane and climbed aboard, headed for Manu’a. For three days, we rode through Ta’u, Ofu, and Olesega by trucks, airplanes and boats, each appropriately fitted for these small, sparsely populated islands. A time or two, we walked through parts of this paradise. Smiles from friendly people greeted us here, and everywhere we went. Just like the ones we met on Tutuila, they were happy.

The islands fascinated us even before we stepped off the airplane. They were crowded, not with people, but with high mountains covered with an amazing canopy enveloped by the prettiest seas one could imagine.

Volcanoes ages ago pushed these mountains from the floor of the Pacific Ocean, connecting the sky to the sea. Palm, banana and coconut trees blanket the vertical sides of the mountains. No architect could design such a structure; no artist could create a more captivating canvas.

One resident, proud of his paradise, said no one needs to be hungry here; you can look around for a coconut or papaya or anything that grows naturally. If you get hungry for meat, you just go down to the ocean and get fish, he explained.

Fruit bats cling upside down on all islands of American Samoa as they feast on papaya, breadfruit, or any of the abundant ripening fruit. Another one of the island’s inhabitants, the coconut crab uses incredibly strong claws to crack the hard shells of coconut.

Tourists are not common on Manu’a. We found a small lodge, six rooms, with one vacant room. Owners prepared a meal of parrot fish, one of tastiest meals we ever had. One of our crew bunked with another FEMA staffer and the other three shared a room; our lead, characteristic of his nature, took a mattress on the floor.

We loved Samoan pancakes, a delicacy similar in appearance to our Southern fried hush puppies, but made with a yeast dough and not as greasy or heavy as our cornmeal hush puppies.

One evening, we finally talked Pa’u and Salataima Young into joining us in a meal of chips and grilled cheese sandwiches, even though they brought food to serve us. (Incidentally, my wife and I hope they, and others, will accept our invitation to visit Texas.)

Perhaps the reason people in American Samoa were not as distressed by Tropical Storm Gita as one might expect was because they saw the blessings the island offered. One local explained it this way, “We need to remember that God is in control.” Islanders seem to be more thankful for what they see as natural gifts than what they personally produce.

Those natural blessings include one of the most beautiful beaches in the world. Our crew took a lunch break to watch vibrant colored fish swimming in unspoiled waters of the Pacific – water that transitioned from aqua to royal blue as it rolled gently over and around black lava rock onto pure white sandy beaches.

Our lunch this day was canned Vienna sausage, sardines with crackers and chips from a local store on Olesega, one of three in this small community. Our escort summoned the owner from her nearby home. With only about 100 people living on this island, it was customary to seek the owner to open a store.

The United States gained control of American Samoa when the U.S. Senate ratified the Berlin Agreement on Feb. 16, 1900. The first U.S Flag was raised the following April 17. Flag Day celebrates this. It is a home coming for Samoans. Dignitaries from around the world come here to celebrate American Samoa’s ties with the U.S.

During our trip to Manu’a, our four-person crew from FEMA and SBA and several individual assistance staff were on hand to personally see that Manu’a residents were registered to get the same help offered to people in Texas, Florida, Idaho or Pago Pago.

Not wanting to miss any qualified survivors, we registered 170 households on the three islands. They are among the more than 6,700 American Samoans registered. FEMA approved more than $12 million to help with damage to houses and property.

We flew, we rode in four-wheel drive vehicles and in the back of pickups. We walked and we traveled by boats through picturesque South Pacific waters to work with the most amazing people in the most breathtaking islands one could dream of to bring federal help to them.

Seeing that people of Manu’a are offered the same opportunity as Luisa Gibbs and others on Tutuila, we felt this part of the mission was complete. We scheduled a flight back to Pago Pago, a taxi ride to the hotel, and back to the office.

(Note: This is the third and final installment of a three part series that describes the impact of Tropical Storm Gita on American Samoa — 6,000 miles from FEMA headquarters and below the equator. This is one FEMA staffer’s perception of the land, the people and the collaboration required to help survivors in American Samoa.)