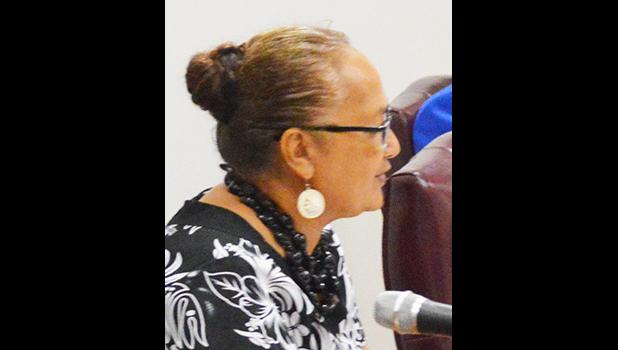 Pago Pago, AMERICAN SAMOA — Fofo Representative, Andra Tereise Samoa is appealing to leaders of all ASG law enforcement agencies to do everything in their power to tackle the drug problem in the territory.

“The drug problem is real and I see it’s getting worse everyday. If we don’t act now our children will suffer tomorrow — so please, let’s work together to find ways to cure this problem,” Samoa said during a house hearing last week.

The hearing was called by the House Public Safety Committee to discuss many issues pertaining to the service of law enforcement agencies in the government.

Samoa’s question was a follow up question from a statement made by Representatives from Manu’a, Rep. Alumamalu Ale Filoiali’i and Rep. Tioali’i Fau Sai on why it is taking so many years to do something to solve the drug problem in the territory.

Alumamalu said that drug problem is not a new issue. It been going on in the territory for many years now but its seem like nothing has been done to stop drugs from entering the territory.

“Drugs are not a new issue — but I don’t understand why it takes ten years to solve it,” Alumamalu said. Alumamalu said the only way to tackle the increase of drugs in the territory is to destroy the roots of the problem.

Manu’a #2 Faipule, Rep. Tiaoalii agreed. He told acting police commissioner Foifua that the Manu’a islands are suffering due to the increase of the drug problem.

According to Tiaoali’i, a man was arrested as he was ready to board an alia boat with a load of illegal drugs and weapons ready to be transported to the Manu’a islands. While that man was in custody, no drugs were seen in Manu’a, however, the man is now released back to the community after his case was dismissed by the court and the drug problem in Manu’a has now started to grow again because of this man.

According to Tiaoali’i, the man he is referring to is bringing marijuana and methamphetamine into the Manu’a islands and he (Tiaoali’i) us very concerned with the future of the young people. He asked leaders of the law enforcement agencies in ASG to act now before it’s too late.

Samoa stated there are almost daily reports in the newspaper about suspects caught with drugs being arrested and prosecuted. She said the sources of drug supplies in the territory are well known as they are mentioned in the newspaper reports of drug cases — Aute and Filifili.

“Why is it so hard for you to shutdown the two main sources of drugs in the territory, the Aute and Le Filifili?” Samoa asked, adding that she personally sees it getting worse.

Samoa recalled a statement by Associate Justice Fiti Sunia saying that American Samoa for many years has had a virus of its own, called ‘ice’. She then appealed to leaders of DPS and DHL to work together to tackle the drug problem in territory before it’s too late. She said some of the inmates released from custody after serving their detention for a drug conviction are back in custody after being arrested and charged with the same offense. The only way to help with these people is to have a rehabilitation program for them to treat their drug problem.

“In order for us to stop the drug problem in the territory we have got to find the main person who is behind the whole operation instead of chasing the users. That will not solve the problem,” Sanitoa said. He also reminded Homeland Security Director Samana the role of the OTICIDE and the chance to work together with the FBI, DEA and the Hawaii Immigration to try and track down those who bring drugs to our shores.

Samana said that efforts are continuing in American Samoa to curb a growing problem of illegal drug use, particularly among youth.

Vice Speaker of the House, Hon. Fetu Fetui Jr says drugs have affected our children, churches and even the government. But the territory doesn’t have any plans to respond to the problem.

“Our families are being ravaged by drug use and abuse. Specifically drugs are destroying the futures of many of our young people. We must take immediate action to battle this epidemic and while we may have government and private programs operating, we need to combine resources and tackle the problem in its entirety,” Fetu said.

He said that, “We continue to try our best … to stop illegal drugs from entering out borders.” He added that the “drug pandemic is never an easy task and we do whatever we can do to combat the drug problem and stop those who are trying to smuggle these illegal drugs into our territory.”

Rep. Lavea F. Mauga said, “Coronavirus is an invisible virus we can cure, but drugs are a visible virus … we’re still trying to find ways to cure it,” adding that “maybe the Fono needs to pass legislation to try to cure the drug virus.”

He said that one of the big problems our government is facing right now is people who don’t want to reveal to law enforcement what is going on around us. He stated that the drug problem started up with marijuana, but right now, we’re moving up to methamphetamine and many other types of illegal drugs.

“Where are these people getting these illegal drugs?” asked Lavea, who then said that all law enforcement agencies need more resources in order for them to deal with this drug problem.

A man was arrested by DPS detectives after they executed a search warrant from the court to search his person and belongings. The man was Mataele Toke, a.k.a Mike Toe, who is Tongan national who lives in Manu’a.

It was at the beginning of last year when Vice & Narcotics detectives received numerous tips that a male by the name of Mataele Toke was selling meth in Manu’a. A Confidential Informer (CI) told police that Toke would come to Tutuila to reload his supply of methamphetamine before returning back to Manu’a via an alia.

All evidence confiscated was recorded and photographed and turned in to the DPS evidence custodian.

Four months after Toke was arrested, the government moved to dismiss their case against Toke. The government’s motion came after the court suppressed evidence in the case and mentioned a possible violation of the 4th Amendment rights of the defendant during the time of the search.

(The 4th Amendment of the U.S. Constitution prohibits unreasonable searches and seizures, and also sets requirements for issuing warrants: warrants must be issued by a judge or magistrate, justified by probably cause, supported by oath or affirmation, and must particularly describe the place to be searched and the persons or things to be seized, according to Wikipedia.)

Toke was released after spending over 4 months in custody awaiting a court date after he was unable to post a $20,000 bond.

It was during the sentencing a man convicted of violating local drug laws last year, while all attention is focused on coronavirus, that Judge Sunia said, “We have a virus of our own and its been here for many years. That virus is called ice.”