Emotions run high as changes are made to Fagatogo’s “Malaeoletalu” 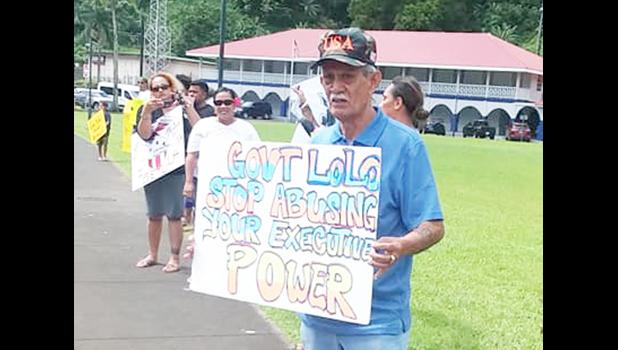 Decision could impact future federal funding for the area
By
B. Chen
blue@samoanews.com

Pago Pago, AMERICAN SAMOA — For the past week, protestors have been posted in front of the Fagatogo malae, publicly voicing their opposition to Governor Lolo Matalasi Moliga’s approval of the laying of a huge concrete slab in front of the Pavilion.

Fagatogo resident, Macy Faagata Woo Ching is at the forefront of the protest, along with members of her family and several Fagatogo villagers, who argue that the “Malaeoletalu” is a historic landmark that needs to be preserved for future generations.

“The Malaeoletalu is still the ceremonial center of American Samoa — the traditional venue for Flag Day and holiday festival performances,” WooChing shared on her social media page. “We want to keep our Malae the way it was before, so please people of Fagatogo all over the world and… all villagers in American Samoa… help us fight” in trying to “stop this government, especially this governor” from “abusing his executive power to do such an injustice act. Help us save our Malaeoletalu.”

Yesterday, Samoa News was able to speak to Letitia Peau, head of the American Samoa Historic Preservation Office (ASHPO) who confirmed that the Fagatogo malae is part of the Historic District.

According to her, the Tutuila Naval Station Historic District encompasses Fagatogo as a whole, starting from the Jean P. Hayden Museum, and includes the old radio station (current site of the Territorial Registrar’s Office); the old jail, the area behind it, and the Fitafita barracks (current site of the DPS central station); the bake shop (current site of the Fire Station); the Fono; the generator house (formerly the ASTCA headquarters); the Fagatogo Catholic and CCCAS churches; the administration building (current site of the High Court of American Samoa); the Iseulaolemoana fautasi shed; the Parade Ground (Malaeoletalu); and Sadie Thompson Inn.

Peau explained yesterday that before she assumed the leadership post at ASHPO, an approval was already issued by former Historic Preservation Officer David Herdrich, to install concrete pavers in front of the Pavilion. And the reason was simple — concrete pavers would solidify the ground but grass could still grow in the area.

Initially, said Peau, the request to renovate the Pavilion came through and when the first layer of the concrete pavers went down, she was at the site. “That was the agreement,” she said. However, she added, much to her surprise — and to the surprise of many — concrete has been poured over the area.

Samoa News understands that it was Gov. Lolo who gave the approval to lay the concrete slab. And now Fagatogo residents are up in arms, saying the Malaeoletalu should be left alone — preserved for future generations.

Some of the protestors who have been lining the streets of Fagatogo everyday for the past week, publicly voicing their opposition to the laying of a huge concrete slab that extends from the Pavilion on to the Malaeoletalu. See story for details. [photo: courtesy]

The funds for the Pavilion project are from the Community Development Block Grant, (CDBG) the federal program administered by the Dept. of Commerce (DOC).

According to Peau, the installation of the concrete slab places an adverse effect on the historic property and “can impact future federal funding” for that area, especially if we “knowingly neglected and/or destroyed a historic landmark.” She said the concrete is “damaging the integrity of the site.”

She explained that there are no local laws in place to protect and preserve historic and cultural properties; however, this is a condition of the Project Notification and Review System (PNRS) Review Board’s Land Use Permit Application (LUPA) process.

For now, Peau said, the decision has been made to lay the concrete and it is her job as the head of ASHPO to find ways to mitigate and resolve the situation. She said no federal agency was involved in the project, because it was issued by the local government.

The work is overseen by the Governor’s Office and the Department of Public Works, and the contractor is local company, Pentagon, owned by Tauileave Toluono.

Later this month, on August 31st, the Fagatogo Pavilion, along with the Jean P. Hayden Museum, and the new DPS fitness center (behind the new Fire Station) will be dedicated during the 6th Annual Workforce Day, hosted by ASG.