DPS cracks down on drug trafficking between Manu’a and Tutuila 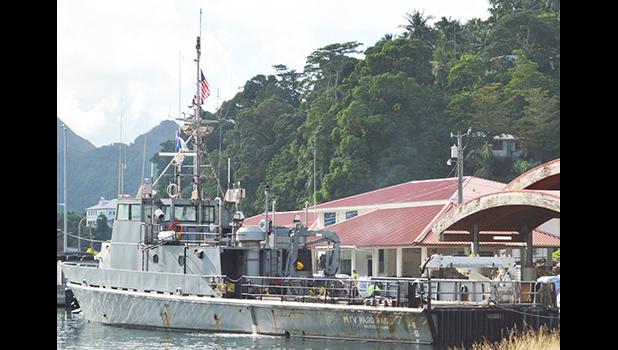 Two busts in May— one nets a suspect the other one got away — so far
By
Ausage Fausia
ausage@samoanews.com

One week prior to this incident, a man was arrested by police when he was about to sail out of the Pago Pago harbor on an alia boat with illegal drugs and a hand gun in his possession.

A source told Samoa News that the investigation of the marijuana allegedly found on the MV Pago Pago is still ongoing and no one has been arrested or charged in the incident.

It was reported that when the MV Pago Pago sailed in from Manu’a last Thursday night, May 28th, detectives and custom agents, along with K-9 sniffing dogs were waiting on the wharf at Pago Pago ready to conduct a search.

The boat was searched and over 200 hand rolled marijuana joints were allegedly discovered in the boat’s bathroom.

Investigators believe that the person who attempted to smuggle in the marijuana joints left the bag inside the boat’s bathroom when he/ she noticed that customs agents, detectives and K-9 sniffing dogs were waiting on the wharf to search the boat.

Investigators interviewed several people on the boat including crew members and other passengers. A source stated that investigators had a list of names of some of the people that they suspect are involved in smuggling drugs from Manu’a.

The MV Pago Pago, owned by Papalii Laulii Alofa is transporting equipment and supplies for the dredging of the Faleasao dock which has been awarded to Paramount Builders, which is also owned by Papalii.

One week prior to this incident, a man who is a Tongan national residing in Ofu, Manu’a was arrested by armed Vice and Narcotics detectives at the Fagatogo Marina when detectives executed a search warrant on the property and person of the defendant, who is suspected of being involved in selling illegal drugs.

It was at the beginning of this year when Vice & Narcotics detectives received numerous tips that a male by the name of Mataele Toke was selling meth in Manu’a. A Confidential Informer (CI) told police that Toke would come to Tutuila to reload his supply of methamphetamine before returning back to Manu’a via an alia.

The government claims that Thursday, May 21st, 2020 about 11:30a.m, several Vice and Narcotics detectives executed a search on the person of Mataele Toke, a.k.a. Mike Toe when he was about to sail out of the Pago Pago harbor along with other Manu’a residents on an alia boat.

Detectives informed Toke of the search warrant and he was immediately detained and searched.

During the search, detectives found inside Toke’s pocket a glass pipe commonly used to smoke methamphetamine with a usable amount of white crystalline substance, which tested positive for methamphetamine.

A partially smoked hand rolled marijuana joint that tested positive for marijuana was also found along with a black wallet with Toke’s identification and $135 cash. Detectives also found two cellphones in Toke’s possession.

Toke was carrying a duffle bag and he agreed to let detectives search his bag in his presence. When detectives opened the bag, they allegedly discovered two medium sized plastic bags both containing white crystalline substance that was found inside army pants. Also discovered in the bag was an empty clear glass pipe and a black pouch containing a 22 revolver hand gun and 22 caliber ammunition.

Substances discovered inside the bag tested positive for methamphetamine.

The amount of methamphetamine found in Toke’s possession is inconsistent with personal use. All evidence confiscated was recorded and photographed and turned in to the DPS evidence custodian.

During his initial appearance, Toke waived his right to a preliminary examination and his case was bound over to High Court. He appeared last Thursday for arraignment where he entered a not guilty plea to the charges against him.