Domestic violence: “Those who wear smiles but yet are suffering at home” 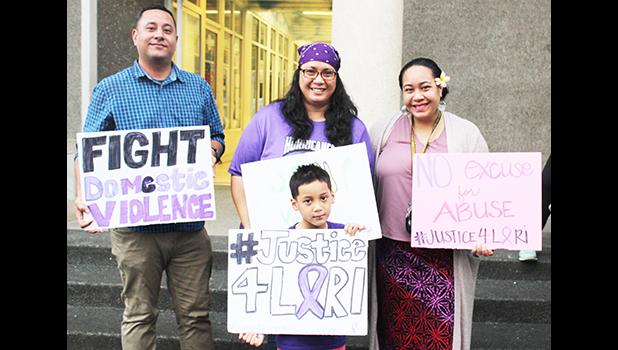 Pago Pago, AMERICAN SAMOA — Among the challenges faced by a victim, in “leaving an abusive relationship”, is where she should reside and who is going to support her, since the husband is often the family’s breadwinner, says Mona Uli of the American Samoa Alliance Against Domestic and Sexual Violence (ASAADSV).

Uli was one of the invited speakers at the early Monday morning rally against domestic violence in front of the Fagatogo Square, where another speaker — a male — shared his hope that after the rally, those in attendance will return to their community and support “those who wear smiles but yet are suffering at home”.

The rally put on the spotlight the latest victim, identified publicly as Lori Fanene, the wife of former cabinet member, Jonathan Fanene who is facing 13 criminal charges for allegedly assaulting his wife and his sister. (See yesterday’s Samoa News for other rally comments)

In her remarks, Uli pointed out that “leaving an abusive relationship is the most dangerous time for victims of domestic violence.” She shared brief information on the ASAADSV’s role in working with the American Samoa Legal Aid office to help victims.

“I share with people what protective orders are and how to go about getting them,” she said, noting for example, that a civil protection order, which is a court order, can be obtained by the victim “against the abusive partner,” and the order includes no contact with the victim — whether directly or indirectly — including contacts through social media.

“Challenges for the victim in leaving an abusive relationship: “Where am I going to live? Whose going to support me [because] my husband was the breadwinner of the family? What about the car, child custody?” she explained. “These are all issues that a judge can address in a civil protection order.”

She also explained that the organization does outreach programs, by educating church and village leaders, families and friends “on how to be first responders, and advocate for victims of violence that may approach you.”

“Sometimes we don’t know how to support [victims]... whether we turn a blind eye or pretend it's not happening,” she said. “We do presentations on how best to support victims of violence.”

(ASAADSV can be reached at 699-0272 and the Legal Aid office has all the information on civil protective orders).

Ken and Luisa Kuaea of the Kuaea Group consulting agency, were the other invited speakers. Luisa is a former police officer from California, who was joined at the podium by her husband.

“I asked my husband to come up with me so that we can show unified support,” said Luisa, who is also a community advocate. She called on supporters of the rally to do anything they can to halt domestic violence, which she says “is happening while I am speaking right now” and it's occurring in homes, and in the community.

Not only is the rally a stand-together against domestic violence and “Justice4Lori”, Luisa reminded the gathering, but “there’s another sister involved too. We need to know her name. I'd like to know here name.”

(The government alleges in court documents that Jonathan Fanene on May 26th assaulted his wife and his sister — who is identified by name in court filings. Samoa News did not name her in our story, because she did not press charges against her brother, only his wife did.)

Luisa said Lori has “given us an avenue to raise our voices, heighten awareness of this evil.”

“Domestic violence is not an option. It's not okay. There needs to be zero tolerance [in] laws and policies on this island. Protect the victim, and not the perpetrator. That’s what we need our government to hear,” she said.

“And it's not just women victims, it's men, it's children. Violence impacts us all. It not only affects our homes, it affects our economy, our mental health,” she continued, adding that those in attendance and others in the community “have obligations and duties to stand up for those who are weak, those who are afraid and intimidated.”

She pointed out that there are local organizations, including faith-based groups that want to help victim of such crimes.

Luisa's husband Ken told the rally, “I have a daughter, sisters, and mother. I consider domestic violence on a personal level. And it really hurts to know that those you see in the community, wear smiles in public — they’re crying for help.”

He said it's reassuring to see a lot of supporters during the rally, providing relationships and community support for those who are suffering.

Several rally participants reiterated to Samoa News — and also on social media — that not only was Monday’s rally for “Justice4Lori” but was also a stand-together for all victims of domestic violence.