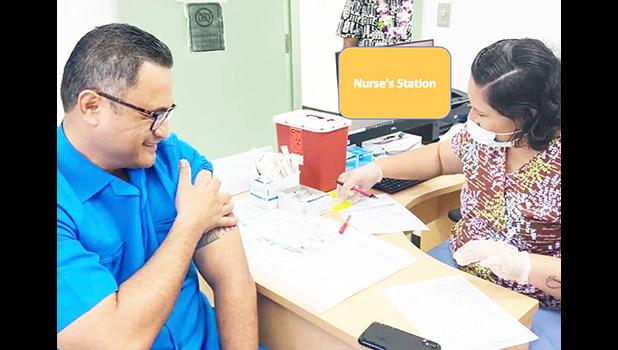 Pago Pago, AMERICAN SAMOA — Over 50% of the passengers from the first two Medicaid- repatriation flights have not paid their fares. This was confirmed by the Task Force chairman, Lt Governor Talauega Eleasalo Ale during a press conference with the local media last week.

When asked about the cost share by travelers, the chairman said that those travelers who are not included in the Medicaid funded travel must pay the $500 cost share. He reported that for the last few flights, about 80% of the passengers had paid their $500 cost share.

“I don’t have with me the exact number of passengers who still haven’t paid their fares, but it’s about 50% of those passengers who are not medicaid funded,” the chairman told the media.

The Task Force plans to operate its last repatriation flight from Hawaii at the end of July and reopen flights to and from Hawaii some time in August.

Talauega made it clear that “COVID-19 will be a fact of life for possibly up to the end of the year or longer.”

He said the Task Force is stepping up its vaccination efforts to get the vaccination coverage, currently at 57.9% for both shots, to 80% in order to safely reopen the borders.

He said that when flights resume they would be restricted. “We will not have two flights per week.”  When the borders are opened with Hawaii in August and with Samoa next month, flights will not be at the frequency they were pre-pandemic, he told reporters.

Talauega said the duration of the quarantine period in Hawaii has not yet been determined and will depend on the recommendation of medical personnel. It’s certain that all eligible travelers must be fully vaccinated as a condition of travel to American Samoa. When flights reopen, the plan is for travelers to perhaps pay a cost share for their quarantine in Hawaii. It’s planned that they will also be quarantined for a few days upon arrival here.

The Lt. Governor was happy to report that nearly all of the outbound travelers in the repatriation flights paid their cost share.

Flights to and from Samoa are to reopen some time next month. However, they will also be on a limited basis.

Taleuega said, “We won’t have a flight every hour or so. Perhaps just two a week.”

“Travelers from Samoa will be released upon arrival. No traveler from New Zealand can travel here right away. They will be required to stay in Samoa for a specific period.”

The Task Force stated that there are a few requests from residents and businesses for charters from Samoa and other areas such as Tonga and Fiji. There were repatriation flights last month from Tonga to bring back local residents stranded there.

Flights from Suva that were scheduled to bring back home local residents stranded in Fiji last month were canceled due to the increase in positive cases in Fiji. The Task Force will continue to monitor the current situation in Fiji before they allow any repatriation flight to American Samoa.

The chairman, along with Task Force doctors emphasized the importance of being vaccinated so that everyone is protected from the deadly coronavirus.

Dr. Iotamo Saleapaga said that the only way to protect American Samoa from COVID-19 is to vaccinate everyone. He said that our neighboring island Samoa has just received their COVID-19 vaccine last month but the number of people who had already had their first shot is over 42,000, compared to American Samoa where it’s only 24,000 people who had their shots despite it being over 7 months since the vaccine arrived in the territory.

The possibility of herd immunity in the near future and the revision of local DOH policies with regard to quarantine requirements in American Samoa were discussed given recent CDC recommendations for persons that have been fully vaccinated. The GAR noted, however, that American Samoa would continue to take extra precautions and a more conservative approach to quarantine measures. Thus far, American Samoa’s approach has been successful in keeping individuals who have tested positive isolated and preventing the virus from entering the community.

“Until such a time where the medical community feels confident enough and comfortable with our vaccination rates, we will continue to do what is necessary to repatriate our residents and keep our community safe from the virus.”

Last month, the Task Force stated that the government, in a gesture to help alleviate stranded residents’ financial hardship due to the unplanned border closure, would assist in their repatriation by providing no-cost quarantine until all our legitimately stranded residents have returned home. They must still agree to pay for the reduced cost share of $500 upon signing a promissory note prior to entering quarantine.”

Only 23 out of the 159 passengers on the first repatriation flight have covered their cost share either through cash payments or Medicaid coverage. For the March flight, the Task Force has received cost share payments from only 14 passengers out of the 188 who made the flight.

This has created a deficit in the Medicaid local budget of $261,000. The Medicaid agency’s local budget was increased by Governor Lemanu Peleti Palepoi Sialega Mauga to accommodate the prepayment of the flight charters with the intention that passengers or other eligible coverage will reimburse the Medicaid budget by paying their cost share.

The chairman added that the prepayment policy would guarantee that passengers pay their cost share to be able to enter quarantine in Honolulu for a chance to get on the flight to return home.

“We cannot continue to have people not pay for the flight otherwise we cannot support the costs of the flight.”

The Task Force will utilize Immigration’s IT system that has the documented departure dates of all people who entered and departed the territory. The DOH list will be resorted to in order to prioritize “stranded” passengers — allowing the longest stranded passengers to travel home first.

Medicaid referral passengers who travelled on the medical charters in 2020 and 2021 will also be prioritized by chronological order based on the date they departed.

For the COVID-19 shots in Samoa, it was reported by the Samoa media last Friday that the Samoa’s Ministry of Health is urging eligible people to get vaccinated against COVID-19 as the roll out for the second dosage starts slowly.

Reports stated that since Monday, June 14, only 505 people have had their second shots, 396 of whom are males. Most of this group are frontline staff and workers who were vaccinated first.

According to ministry records, 42,373 people have been administered the first dosage with women still slow on the uptake. Director General of Health, Leausa Dr Take Naseri, told the Samoa media last week that the women lagging in numbers is as expected given many of them are not able to be vaccinated for various reasons. “These include women who are pregnant or breastfeeding,” he said.

Leausa urged all other eligible people to please get vaccinated against COVID-19 as this is the only “protection available”. Meanwhile the Samoa national vaccination roll-out has started in the big island of Savaii and still continues in the outer villages on Upolu island.